The Oilers at the Half-Way Point

Share All sharing options for: The Oilers at the Half-Way Point

At the quarter pole, the Oilers had a record of 11-8-2, and a goal differential of +6. In the second quarter, the team hasn't done quite as well. Their record of 5-14-1 is terrible, but it was built on a goal differential of -14, which is bad, but not so bad that you'd expect a 45-point pace. Mixing poor play with bad luck is never much fun, and the spirits in Edmonton are ebbing low these last few days as injuries and losses mount. So what all has gone wrong? Well, they've played a lot more games on the road in this quarter (12 on the road against 8 at home), and it's plain to see that the club is a much better home team when Tom Renney is better able to control matchups. A look at some of the team's possession numbers will serve as confirmation for this, but there's also a bit of wackiness going on with this season's underliers. 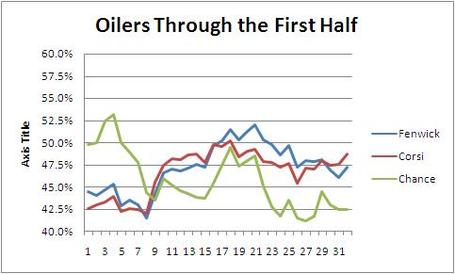 It just looks weird. Fenwick and Corsi are tracking together (as you'd expect), but scoring chances haven't really been close except for very brief periods. The small peaks and valleys are similar, but the large movements are not. In fact, looking at the ten-game segments, there is actually a negative correlation between scoring chances and both Fenwick (-0.20) and Corsi (-0.41). The goaltending numbers reflect this reality. When the Oilers were getting the majority of the chances but getting handily outshot, the save percentage was very high, but now that the Oilers are allowing fewer shots but more chances, the save percentage has plummeted. I don't know how much of the change is related to shot quality, but the above data suggests that it's a lot more than none.