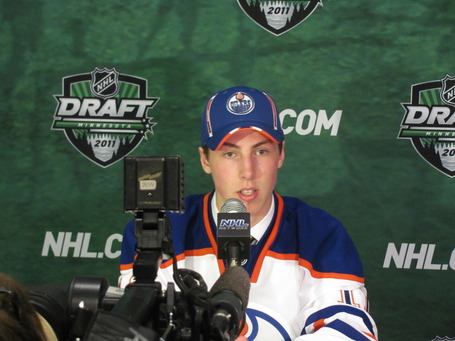 Throughout the run-up to the 2011 NHL Draft and in the months since, Scott Reynolds has spent an inordinate amount of time sorting through the numbers to find a comparable player for Ryan Nugent-Hopkins. The numbers haven't delivered astounding comparables like they did with Taylor Hall, and the reader reaction has been...grouchy, to say the least.

Scott's had a tough time finding high overall picks with low goal totals, but the readers think it's not a cause for concern. We've had responses talk about his skills that don't translate to the scoresheet, and his high-level play-making ability. We've also heard about Red Deer's fourth line, the fourth line with apparently the most time on ice in CHL history, though Scott dispelled that narrative to a large extent. There's also the matter of the early-season slump, a slump in which he totaled "only" 47 points in 35 games. Then he caught fire. Through his last 35 games, he totaled 59 points, and caught everyone's eye, including scouts everywhere. I've seen a number of people at HF, Lowetide and ON posit that the "real" Nugent-Hopkins is the player of the second half, not the first, and somehow tie his rise in the draft rankings to an unstated scouting opinion that he is the second half player rather than the whole-year player.

The need to inflate Hopkins' numbers is bizarre, but understandable, to an extent, to me. He's the newest, brightest prospect and his ascension to greatness is the final piece to hauling this franchise out of the gutter. But when we're trying to predict his numbers, predict his eventual level of production, or put a stake in the ground to measure his development, aren't we better off taking the honest approach and finding the realistic comparable, rather than tying our wagons to the completely unrealistic wish and hope approach?