Share All sharing options for: Preventing Zone Entry On The Penalty Kill, Part 2

Zone entry can play a big role in the success or failure of your special teams. On the PK, the ability to prevent the other team from setting up their power play in your zone is essential in running a successful PK.

The goal of your PK entry is to make it very difficult for your opposition to gain possession of the puck in your end. That means preventing them from being able to carry the puck into the soft zones (areas where there is no defensive pressure) and instead forcing them into pressure areas or dumping the puck into the zone.

Last week, we took a look at the 3-1 and how you can successfully use it to force your opposition to dump the puck in. We also saw what happens when your front 3 breaks down and doesn’t play in their lanes.

The other popular PK entry is the 2-2 which involves the 2 forwards attempting to funnel the puck into pressure, as opposed to the 3-1 which attempts to force a dump in.

You’ll typically see a 2-2 with a team that likes to send a forward deep into the opposition zone on the fore check (think Calgary, Minnesota). When not pressuring down the ice, the forwards and the defensemen set up in a pair of parallel, offset lines. The forwards then try to force the puck carrier over to the side where the defensemen are. If the puck carrier continues on the same side (doesn’t cross over the ice), then the defenseman slides over and the F and D try and pinch the opposition player along the boards, while side pressure comes from the other forward and the other defenseman settles in the middle of the ice as support. 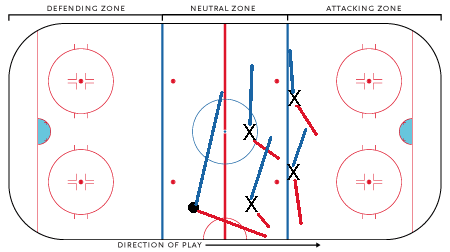 Unfortunately the video only shows what happens after the zone has been gained, but there are screenshots leading up to when the Oilers were able to gain the zone. 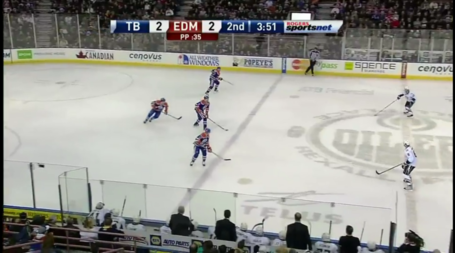 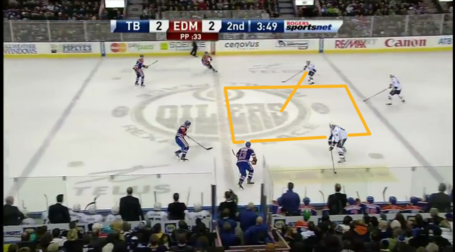 Both the defensemen and the closest forward (Malone) are playing for Paajarvi to take the puck to the close boards. The far forward though, doesn’t adjust properly and floats wide, which gives a lane toward the middle of the ice (similar breakdown as the 3-1). That far forward needs to be at the ‘S’ in the Oilers logo. What ends up happening is Paajarvi sees the gap and makes a quick cut back to the centre of the neutral zone. 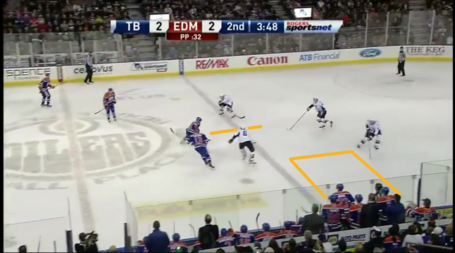 The quick cut by Paajarvi has now forced all of the Lightning players to collapse to the centre of the ice. Ryan Malone on Tampa isn’t quite able to cut the angle off and the other Tampa Forward is a step off as well. They might have been able to recover if it was anyone but one of the fastest players in the league, but even a pass to a streaking forward would have had the same effect. You can see Omark on the boards closest to us, and Cogliano crossing behind Paajarvi, which will give the Oilers a couple of options (corner dump to Cogs or a short dump into the top of the zone to Omark). 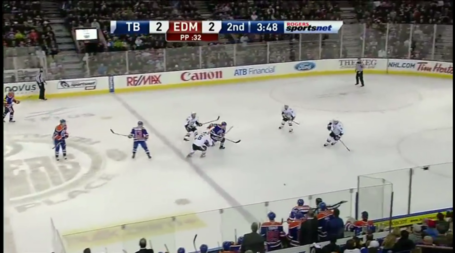 Paajarvi is able to cross the blueline and put the puck into an area where Omark can gain control. From here, the Oilers are able to set up their power play which leads to a goal. One of the common themes in the breakdowns is one player not being where they are supposed to be, which more or less submarines everything you are trying to do. 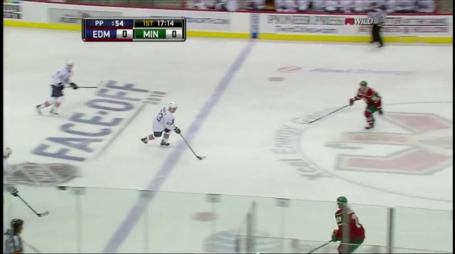 The Minnesota Wild do a good job executing the 2-2 here. Hemsky has the puck and Brodziak and Clutterbuck are going to try and make him go to the far side. Gagner is on the near boards (off screen) and Penner is right around centre (off screen). 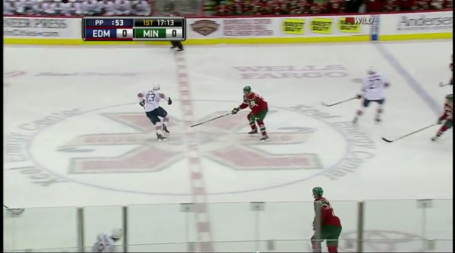 Hemsky makes the outside cut. Clutterbuck follows him wide and Brent Burns (far D-man, slightly off screen), also begins to go over. The Wild are trying to force Hemsky to try a chip dump to Penner or try and see if he can beat them wide. 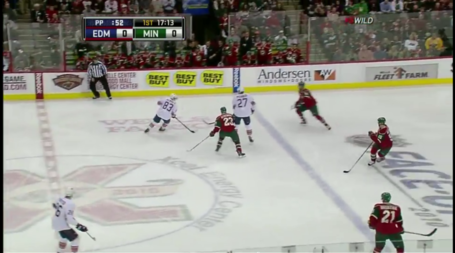 Burns and Clutterbuck converge on Hemsky. Schultz is guarding the middle of the ice and Brodziak is now looking to head back in case Hemsky dumps the puck in. The Wild have essentially cut Hemsky’s options off. Penner is basically standing still at this point and the Oilers would have to reset the break in to use either Foster or Gagner. 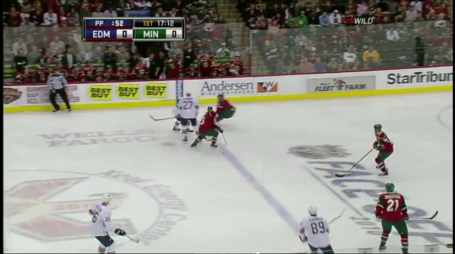 Clutterbuck and Burns are able to get to Hemsky before he can get the puck over the line and while both Penner and Gagner are essentially standing still on the blueline. Formation wise, the Wild were able to funnel Hemsky off and play him before he could gain the zone.

The 2-2 and 3-1 aren’t the only PK entry systems, but they are the most common. As with most systems, individual coaches add their own tweaks based on the players they have as well as the opposition they are facing. I’ve typically used the 3-1 for the simple fact that in lower levels of hockey (i.e. Bantam ‘A’, Lower-tier men’s, etc...) players aren’t used to dumping the puck in so it gives them a look they aren’t used to. It’s also pretty easy to explain and to implement without a lot of practice.