Jeff Deslauriers, Devan Dubnyk, Martin Gerber, Mathieu Garon, Nikolai Khabibulin, Jussi Markkanen, Dwayne Roloson.  In five years, the above group has contributed to some of the worst goaltending in the NHL.  Just once have the Edmonton Oilers had better than league average goaltending since their trip to the Stanley Cup finals in 2006.

They've tried first-round draft choices, expensive old "clutch" goalies and a couple of backups.  The latest thought is that they'll ride out Khabibulin's contract with Dubnyk as the starter and wait on Tyler Bunz and Olivier Roy -- just like they waited on Deslauriers and Dubnyk.  Waiting for young goaltenders to turn out is a gamble - the non-linear development of goaltenders and unforeseen potholes in technique and ability derail the even the best prospects.  Waiting should be plan C or D, because if the Oilers can't find average goaltending by the expiration of the six-year window on Taylor Hall, Jordan Eberle, Magnus Paajarvi, Jeff Petry and Magnus Paajarvi, the six-year rebuild will extend into a ten-year rebuild.

The next table contains the numbers from qualifying goalies only:

As expected these numbers show the same trend.  Qualifying goalies make up such a large percentage of all goalies that it would take some really awful backup goaltending to diverge from the starters' trend.

I've graphed the even strength save percentages in the chart below.  The blue line is the league-wide average, the red line is the average for qualifying qualtenders only.  Click to enlarge the chart. 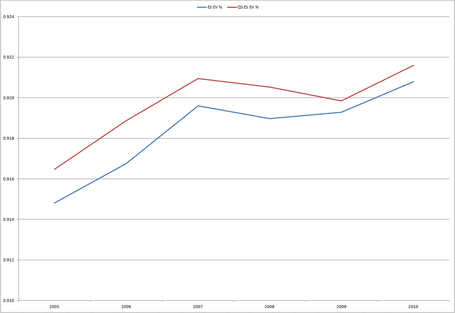 There's a distinct upward trend and this has nothing to do with special teams.  I haven't dug into any reasons behind this, but if it continues, the NHL will start making rule changes or equipment changes again.

In the table below, I've copied the league-wide numbers and I've added in the Oilers' yearly average since the cup run as the orange line, which should be compared to blue line.  I've also plotted the Oilers' qualifying goaltenders with orange dots. Click to enlarge the chart. 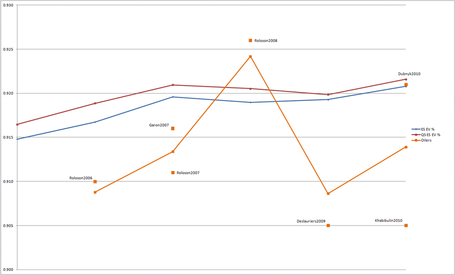