Share All sharing options for: Preventing Zone Entry On The Penalty Kill, Part 1

First off, I’d like to mention that it’s a pleasure to join the crew at The Copper & Blue. I’ve been part of the community for a couple of years now and I’ve always been thoroughly impressed at the content the writers here have been able to contribute on a daily basis.

My contribution will be a weekly article focusing on the tactical side of the game, including things like systems, formations, breakouts, etc. I promise lots of videos and pictures, but it’s BYOC (bring your own crayons).

A little background on myself: I’ve played at various calibres of ice hockey for over 25 years. I’ve played organized ball hockey for 10 years (unorganized since probably conception). I’ve played an additional 25 years of lacrosse and while I’ve never played it competitively, I’ve been a huge basketball fan my entire life. I’ve also got over 20 years of coaching experience (combined) in hockey and lacrosse, coaching everything from 5-year-old house leaguers to elite 18-year-olds.

I mention lacrosse and basketball with hockey for the simple reason that these sports share some pretty common traits by my eye. Offence and defence in both sports rely heavily on the same philosophies. On offence, you are trying to create and identify mismatches in order to exploit your opponent. On defence, you are trying to fill lanes and be ready to support your teammates in case of a breakdown. So even though they are completely different sports, you can apply lessons learned from all of them to hockey.

The penalty kill has become a major story in Edmonton. The Oilers have been a dreadful short-handed team over the past few years and there are many reasons why. The goaltending and defensive zone systems have already been discussed to death, which leaves an often overlooked aspect of the PK:  Zone Entry.

Penalty kill entry is, in my opinion, the most important part of the penalty kill. It’s a simple premise: if the opponent can’t set up the power play it’s going to be very hard for them to score on it.

There are basically two types of formations on the PK entry. The first one is the 2-2 and the second is the 3-1. Today we’ll focus on the 3-1 as it’s a pretty easy concept to grasp because it’s easy to identify the lanes the players are supposed to guard and to see where the breakdowns occur should they fail. My opinion of a successful entry is being able to carry or chip the puck into the zone and set up your power play. The goal of any PK entry is to force a turnover or force the opposition to dump the puck into the zone. The idea behind the 3-1 is that you are stacking 3 players in front to block entry, and leaving 1 player behind to retrieve the puck. The benefits are that it makes it hard to gain the zone with possession of the puck, and it gives you a head start on a dump in. The downside is that you are susceptible to chip and retrieves, where the puck carrier chips it off the boards and gets in behind your line of 3. As with any system, a player in the wrong spot can cause a breakdown, as seen in this goal by Jonathan Toews.

Yes the shot should have been stopped, but the Blackhawks gained the zone far too easily and with too much speed. Even without the goal, the Hawks would have been able to set up in the zone without any trouble, which is a successful entry by my standard. If they are going to gain the zone, at least force them to make a perfect play or into a situation where they must use their superior numbers to gain control. The sad part about this play is that it was literally about five feet away from being a nothing situation. Shawn Horcoff and Jordan Eberle are playing wide with Tom Gilbert in the middle of the 3-1. The only problem is that Gilbert is further back, cheating towards the defensive zone, which creates a big gap in the middle of the ice, outlined in yellow below. Compounding it further, neither Horcoff nor Eberle has adjusted to Gilbert's absence. There is a Hawk at the Oiler blueline on Eberle’s side, unseen in the screen cap below, but no one on Horcoff’s side. If Gilbert isn’t going to slide up, he’s got to identify that Horcoff can move to the middle and tell him (essentially turning it from a 3-1 into a 2-2). Even though Toews is coming along Horcoff’s wing, he’s far enough back that Horcoff can settle in the passing lane if Toews breaks. If Toews doesn’t break, Horcoff is still in position to slide back over if they make a lateral pass to Toews. 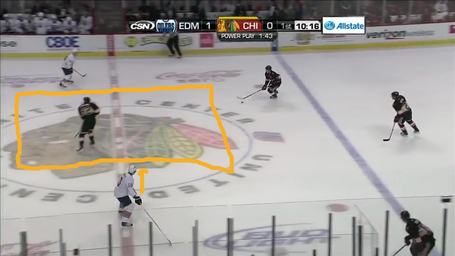 Here is where the breakdown occurs. Eberle is in an okay spot in a true 3-1 because he’s in the passing lane of the only Hawk ahead of the play. Gilbert is too far back and is still retreating. Right now it looks as if the forwards are playing a 3-1 and the defensemen a 2-2. Horcoff begins to recognize that there is a big gap in the middle of the ice. At the same time, Toews makes his break because he expects Horcoff to go to the middle of the ice. If Gilbert is at the base of the centre faceoff circle, the Oilers are in perfect position. Instead, there is a free lane towards the middle of the Oilers zone. 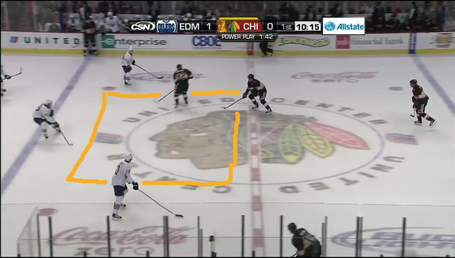 Both Eberle and Horcoff see the opening and try and converge on it. By then it’s too late as the Hawks will gain the zone with possession of the puck. The Oilers might have been able to recover if Gilbert hadn’t also decided to converge on the gap as well. When one player makes a mistake and 3 try to correct it, disaster usually follows. 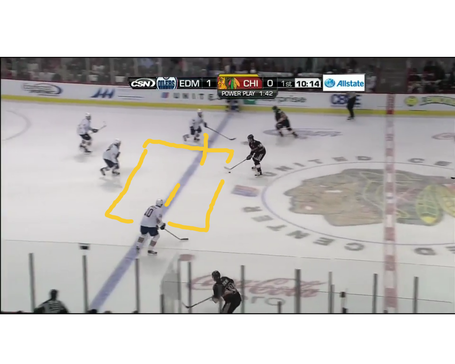 Horcoff realizes both Eberle and Gilbert have started to converge on the puck, so he then turns his attention back to Toews. By this point, Toews is at full speed and hitting the zone at the same time as the puck. Horcoff darting in then turning back around gave Toews the time and space he needed to be able to find a hole in the defensive zone. 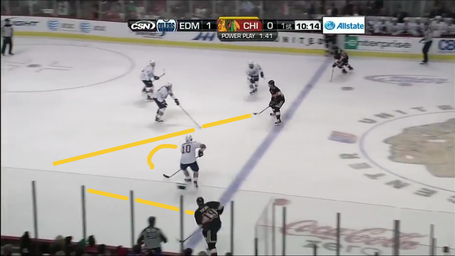 Toews now has a step on Horcoff and the rest is history. Even though it’s a shot Nikolai Khabibulin has to save, this is also a major screw-up by the PK entry team. Even if he doesn’t score here, Toews would have had an easy time settling the puck and setting up the PP. There was never any doubt that the Hawks were going to be able to gain the zone. If they are going to beat you, it has to be either very hard, or they have to be perfect. 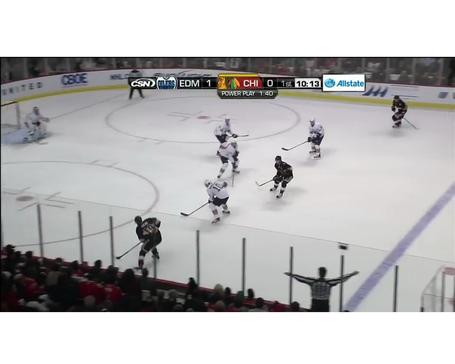 The next example shows the Oilers PK lining up 3 across the top. Theo Peckham is the defender in the middle with Dustin Penner and Ales Hemsky flanking him. I’ve drawn the rough guidelines for the areas of the ice each player is responsible for. Peckham has marked the puck carrier (furthest Hawk player), and he’s also responsible for the player beside the puck-carrier. Hemsky is a bit further back because he’s covering the Hawk winger at the blueline. Penner is guarding the closest Hawk player. Notice how neither 27 or 83 is too wide. One mistake you see is that players play right against the player they are covering, which in this case would open up the middle of the ice. Instead, they should play a couple of feet off, which allows them to both cover their man and help defensively. Being able to skate five feet in either direction is a better bet than having to skate ten feet to cover for a teammate. Right now the Hawks really only have one pass they can make, which is to the defender on the far side (they have the short two-foot pass, but that’s a really tough pass to make when you’ve got a defender ready to stand you up). 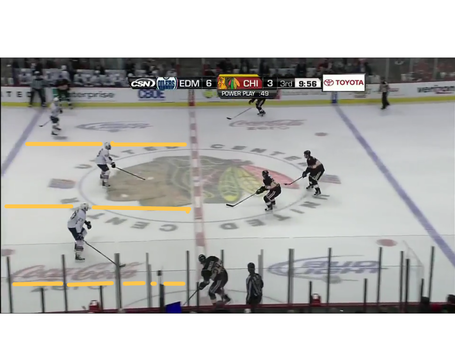 As the play continues, the three Oiler forwards back up and hold their line. The Hawks still only have a lateral pass with no real way to enter the zone while carrying the puck. Instead, they choose to dump it in. You can see Hemsky on the far side turning to head deep into the zone. That’s because the Hawk player is dumping it in on the same side as the camera, meaning it could go around the boards to Hemsky (or he’s there as puck support if the Oilers defenseman gets to the puck). On this play in particular, Hemsky retrieves the puck and gets it back down the ice. 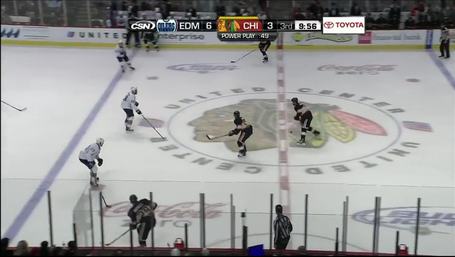 Once something breaks down, there’s usually another error that occurs as players compensate. As we progressed through the first example, there were several steps where individuals broke down and others tried to compensate, which caused further breakdowns. Eventually it just turns into this: