Ales Hemsky on the Power Play

Share All sharing options for: Ales Hemsky on the Power Play

Earlier today, Derek wrote an article on Ales Hemsky that showed how favorably Hemsky's scoring rate compares to some of the best players in the game. Hemsky is one of my favorite players, largely because of courage and grace with which he plays the game, so I don't need any convincing that he's a fantastic player, but Triumph offered what I thought was a very good partial rebuttal:

While Hemsky is a first line winger, there’s no doubt, why do I always hear complaints from Oiler fans about the power play that runs through Ales Hemsky? You can’t both praise his point totals (which are helped by the fact that the PP goes right through him) and then not have him at least take some blame for why the Oil power play is so bad.

Most of us agree that Hemsky is a fantastic player at even strength. He's an excellent scorer, he handles himself against the best other teams have to offer, and he creates more on offense than he gives back the other way. When he's healthy (which isn't all the time), he's tremendous. But the power play might just be a different story.

In the chart below, I've compared Hemsky to the top power play man (by time on ice) on some of the other teams in the NHL. In order to qualify, a forward simply needed to lead his team in five-on-four ice time per game in three out of the last four seasons. The rate statistics presented are based on the aggregate total of the last four years (three in the case of Jason Arnott): 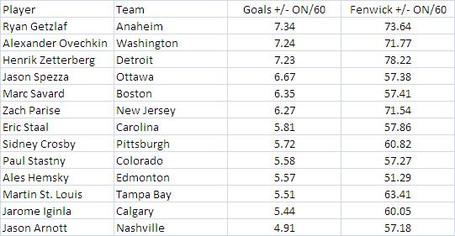 Obviously we're looking at team performance more than individual performance here, but there's a substantial gap between Hemsky's Oilers and the elite teams on this list in terms of scoring. And if we look at the shooting rate, Hemsky's Oilers are in dead last by a substantial margin, which is important both because there is a strong correlation between scoring a lot and shooting a lot on the power play, and because a team's shooting rate is a good predictor of future performance.

So does this mean that Ales Hemsky is a bad player? Not at all! But we can't ignore the fact that he's part of a losing strategy when the club is on the power play. And it's probably not stretching the truth to say that he's the biggest part. It's a near certainty that Hemsky gets asked for input from the coaches when it comes to strategy, and even if he doesn't, it's a fact that no one touches the puck as much as Hemsky does when he's on the ice and the Oilers have the man advantage. No one has more influence than him on a power play that has consistently struggled. That doesn't necessarily mean that Hemsky should be taken off the ice entirely, but it does cry out for a change.