Over the last week or so, I've been looking at the individual point percentage - a calculation of the number of times an individual player gets a point (either a goal or an assist) relative to the total number of goals scored while he's on the ice - for all of the forwards who saw a significant amount of ice time during the 2010-11 season. Today, I'll start doing the same thing for defensemen.

As you might expect, defensemen are in on significantly less offense than forwards, which means that they'll have individual point percentages that are significantly lower. Still, some defensemen are much more important at the offensive end tIn order to get an idea of what makes for a good number, I'll start by looking at just the defenders who have played at least fifty games in each of the last four seasons, and take a look at their four-year average. 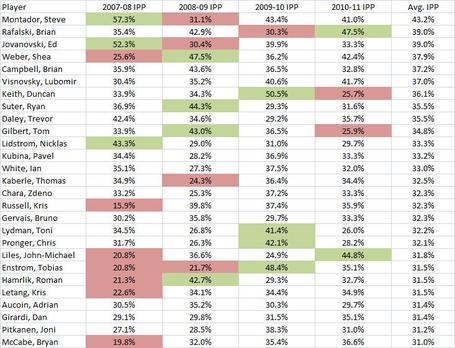 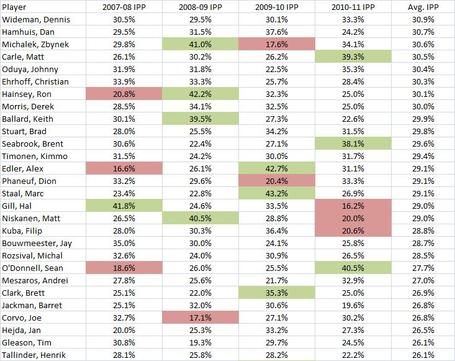 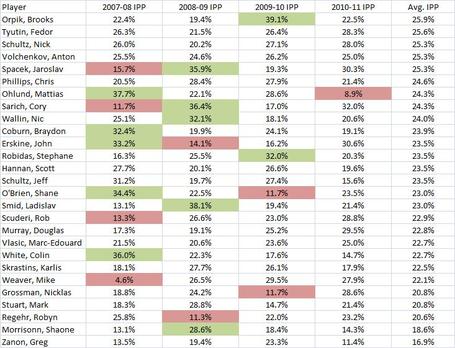 The first thing you notice is that there aren't nearly as many defenders as there are forwards, with just 82 men meeting the fifty-game minimum in each of the last four seasons. Still, that's a decent sample of guys to look at when we're trying to see how this works itself out over time. The average four-year average (yikes) is 28.6%, but I'd guess that that number is probably a little bit higher than "actual" average since we've encapsulated a whole bunch of survival bias. But that might not be true. As it turns out, the average for the 174 defensemen who played at least fifty games in 2010-11 was 30.1%.

As for the top and bottom end of the list, I think it generally makes a lot of sense to me with the big exception being the guy at the very top. I would not have guessed that Steve Montador would be the leading the group, but I also haven't seen the guy play all that much, so I'll make a mental note to pay attention to the man's style when the Oilers play the Blackhawks this year.

But other than Montador, the top third of the list is populated by guys who belong there, including Edmonton's Tom Gilbert. He didn't have much luck in 2010-11, but Gilbert is a very good passer, and a guy who has a good sense of when it's appropriate to jump into the play. I get the feeling that he did less of that than he'd have liked playing the toughs with Theo Peckham at his side, which is one of the reasons I thought the Oilers should go out and get a couple of players to play a tough minutes role. Gilbert and Ryan Whitney playing together in more offensive situations could have been very good indeed. Alas, it looks like we might be seeing more of Gilbert-Peckham or Gilbert-Smid.

And speaking of Ladislav Smid, he's one of the many guys who look like they're exactly where they should be on the bottom third of the list. Smid saves his number a bit with what looks like it was a very lucky year in 2008-09, but overall, I think he's about where he belongs. The guys around him generally belong there too. Guys like Anton Volchenkov, Robyn Regehr, and Douglas Murray are very good hockey players, but they're not exactly known for their offense.