Yesterday, I looked at the individual point percentage -  a calculation of the number of times an individual player gets a point (either a goal or an assist) relative to the number of total goals scored while he's on the ice - for all of the forwards who were on the ice for at least ten goals-for during five-on-five action for each team in the Western Conference. After the jump, I'll be doing the same thing for each club in the Eastern Conference, and comment briefly on each one.

In case you need a refresher, the results here will hopefully give us a better idea of which guys are handling the puck a lot in the offensive zone and helping to create goals. When we look at the results over a long period of time, we can see that the guys who are doing this usually rise to the top. But that's not to say it gives a perfect reflection of reality with just one year of data. The league average for forwards is somewhere between 69.5% and 70.0%, and most players will regress toward that number over time even though, in an individual season, you might see a player do much better or much worse (a lot like shooting percentage). The raw data here all comes from Gabriel Desjardins' behindthenet.ca. Now on to the teams (in alphabetical order by city):

Evander Kane shows well here, which is encouraging, but play-maker Bryan Little doesn't look good at all, and with 104 five-on-five points off of 170 five-on-five goals for his career, it's not a new struggle. That works out to 61.2%, which is significantly below average, and not at all what you're generally looking for from a scoring center who handles the puck with regularity. 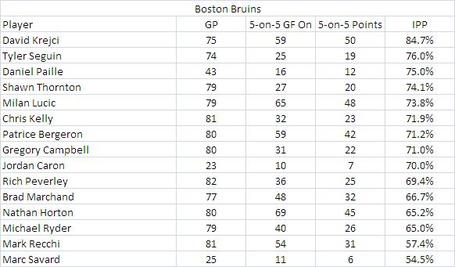 Marc Savard had a rough start to the year by this measure, but with just eleven events, you can't really come to any conclusions. David Krejci looks great, and in fact, he did very well on the overall list when I was looking over the data for the last four years. The Bruins may not count on him to take on the other team's best, but they do count on him for offense, and he's been excellent. 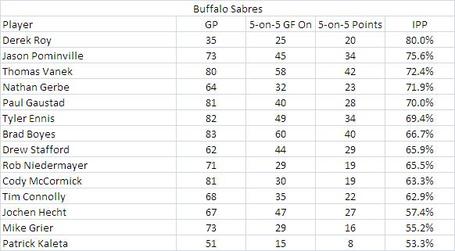 This is a pretty conventional-looking team with all of the skill players near the top, and all of the grinders near the bottom. Except for new Maple Leaf Tim Connolly. But Connolly has actually been close to average over the last four years (105 points on 155 goals for or 67.7%), so it'll be interesting to see whether or not this number changes significantly with a change in team.

No doubt about who stands out here, and Eric Staal has just never been particularly good by this measure (his four-year average is 68.5%). And yet I think you'd be hard-pressed to find a fan of the Hurricanes who'd tell you that Staal isn't one of the guys driving the offense in Carolina. He has, after all, led the Hurricanes in even strength scoring each year from 2005-06 to 2009-10, and while he didn't do that this year, it's still a very odd result. Any Hurricanes' fans care to chime in? 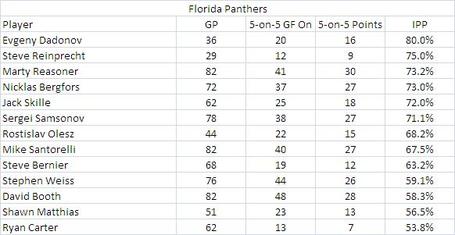 Is it any wonder this team was so bad? Just look at those names! And the best players are the guys getting rocked! Both David Booth and Stephen Weiss look poor here, and for Weiss, it's a pretty consistent thing with a 59.3% IPP over the last four seasons on 204 goals for. Booth, on the other hand, is still a little bit above average over the last four years (70.9%) even with this tough-luck year thrown in. 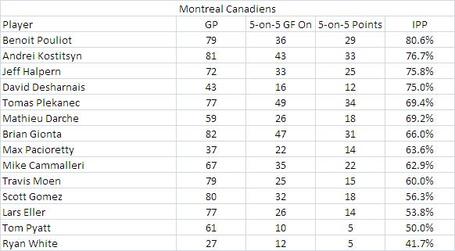 Tomas Plekanec had an excellent IPP for les Habitants in 2009-10, which helped him to a career-high 70-point season and a fat new contract. Although he didn't quite meet that total in 2010-11, he still performed very well, so the Montreal faithful haven't turned on him yet. But Scott Gomez? There's a guy the fans don't seem to like. But between this terrible percentage and a really terrible 3.5% personal shooting percentage, I've got to think he might be an interesting guy for a budget team to buy if the Canadiens are looking to sell him.

Zach Parise isn't on the chart, but over the last four seasons, his 78.1% (150 points on 192 goals-for) puts him among the league leaders. He's not New Jersey's only offensive weapon, but he's one of the guys in the league who seems to be able to create goals, so it's no wonder the Devils struggled significantly without him.

Oh, Michael Grabner. Here we have a guy who was never much of a scorer in the American Hockey League (his best year saw him score 48 points in 66 games) get claimed off the waiver wire and put up big numbers in the NHL with a very high individual point percentage, and a shooting percentage in all situations (14.9%) that was higher than what he managed in his AHL career (12.3% on 555 shots in the regular season). It's, of course, quite possible that Grabner is a late-bloomer, but like Robert Nilsson before him, he's probably very wise to have cashed in after his big year. 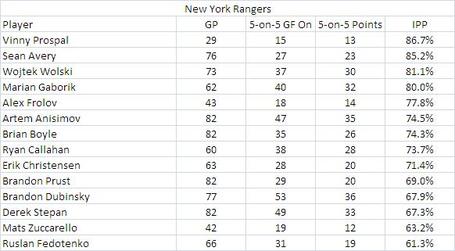 I really, really like Wojtek Wolski. Pretty much every group of fans that has had him play for their team seems to hate the guy, but I think he's a tonne of fun to watch, and I am completely unsurprised to see him do well here and do well consistently. Detractors will tell you that he takes too long to make decisions, or that he's lazy, or that he turns the puck over too much, and they may even be right about all of those things. But when the guy is on, he's among the very best in the league. 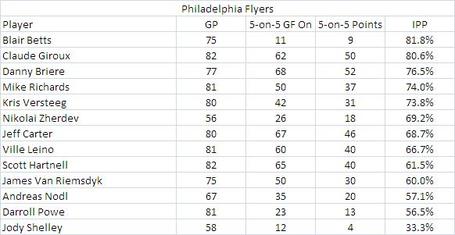 I really like Claude Giroux, and he's building a nice-looking sheet for himself. His goal and point totals have increased each year along with his ice time, and his IPP is a very strong 77.4% through his first three seasons, which is about where you'd expect it to settle for a guy who's able to drive offense. The Flyers have did some weird things in the last twelve months, but signing Claude Giroux to a contract extension isn't one of them. He's going to be very, very good. 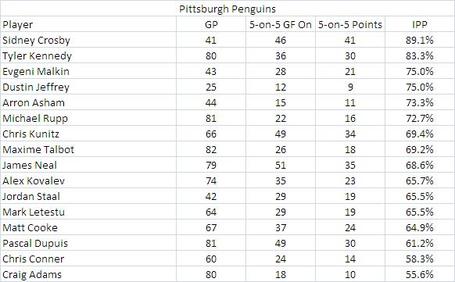 Sidney Crosby is the best player in the game today, and like so many other statistics, he leads the league here too if we look at the four-year sample. It looks like he's going to make sure he's 100% ready before he comes back this year, which means fans in Edmonton won't get to see him play live for half a decade, but it's definitely the right call. Best wishes for a full recovery.

Yeah, yeah, St. Louis and Stamkos are great, but what's up with Vinny Lecavalier? As it turns out, probably just a hard-luck year. In his previous three seasons, he'd put up 77.3%, 75.5%, and 89.7%, so he's usually among the league leaders. But in 2010-11, he had just three second assists five-on-five, which is hilariously low for a player like him. Lecavalier is almost certainly overpaid, but I wouldn't be using this number to suggest that he's not a great player in the offensive zone. 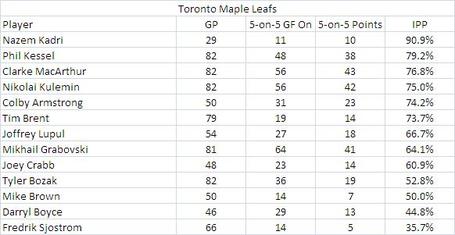 Guys like Fredrik Sjostrom really can't afford down years with the percentages because it often puts them right out of the league. The hockey gods are a cruel bunch, Fredrik. On the bright side, I hear that Europe is much nicer than Toronto. 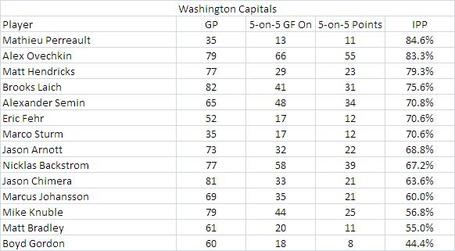 Alex Ovechkin is consistently near the top of this list, and Nicklas Backstrom is consistently about average. Now, I'm not saying that Backstrom is a bad player because he's clearly pretty good, but $6.7M for 10 years is a whole lot of money to stick with what you know. It may end up working out fabulously, but I get the feeling that the Capitals may have given Backstrom a bit more credit for his numbers than he deserves.