Two weeks ago, the Barons announced that, in conjuction with the Cox Convention Center's managing group SMG, they would be reducing the capacity in the arena from 12,947 to 7,500 seats. After an inaugural season that saw an average attendance of 4,155 it certainly makes sense, but the big interest will be how they arena staff handles the changes.

The press release states that "Capacity modification will consist of coverings for the seats in the upper levels of the Cox Convention Center." To give an idea of the changes, here's the seating map from last season. 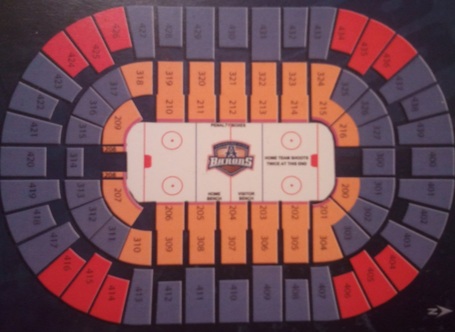 And the seating map for this coming season. 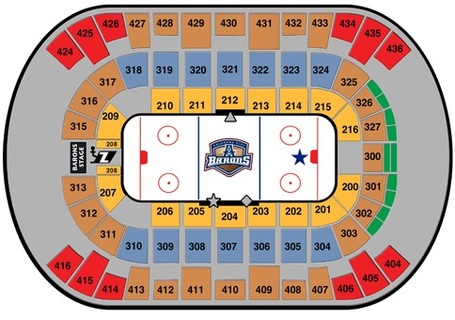 The obvious changes are the seven sections on each end being covered up. Among the minor changes, the 200 sections are all now covered under the same price group, the addition of a stage where the small section 314 was, and a narrowing of sections 207 and 209 where the players' locker-room entrances are located. I don't have the exact numbers on seats in those sections, but I'm having a hard time counting up to the 5,447 seats that will supposedly be covered.

What becomes the question now is how it will aesthetically change inside the arena. With a large area to cover, there are a lot of possibilities. Down the road at the Bricktown Ballpark, the Oklahoma City Redhawks (Triple A baseball) covered their upper deck this season. They announced that there would be no plans to remove the tarps this season, and actually gained sponsorships to put on the tarps.

When the old Blazers team played at the then-Ford Center across the street, on nights that the crowd exceeded the lower level capacity, the arena would draw up a curtain that contained the upper level to add room for more attendance. For the Barons, who last season drew 9,818 for opening night against the Houston Aeros and 8,833 for their home finale against the Texas Stars, it remains a question whether or not they'll do the same type of thing at the Cox Center. The modification allows the team to sell seats closer to the ice first keeping the crowd more condensed, but it would be a shame if they were to turn people away when there are seats that would be usable.