Last week, I talked about individual point percentage -  a calculation of the number of times an individual player gets a point (either a goal or an assist) relative to the number of total goals scored while he's on the ice - for all of the forwards in the NHL who managed to play in at least fifty games in each of the last four seasons. I think that it's a great way to use the statistic because it gives you an idea of how a player has performed over a long period of time. On the downside, it leaves a lot of players out.

So after the jump I'll drop the 2010-11 data for all of the forwards who were on the ice for at least ten goals-for during five-on-five action for each team in the Western Conference (I'll be doing the Eastern Conference tomorrow), and make a brief comment about each one.

In case you need a refresher, the results here will hopefully give us a better idea of which guys are handling the puck a lot in the offensive zone and helping to create goals. And when we look at the list over time, we can see that we are in fact measuring a real skill. But that's not to say it's foolproof. The league average for forwards is somewhere between 69.5% and 70.0%, and most players will regress toward that number over time even though, in an individual season, you might see a player do much better or much worse (a lot like shooting percentage). The raw data all comes from Gabriel Desjardins' behindthenet.ca. Now on to the teams (in alphabetical order by city):

The Anaheim Ducks show most of what to expect. We've got most of the star players near the top of the list and most of the guys playing bottom-level minutes near the bottom with some surprises along the way, including a skill player doing better than he will over the long term (Teemu Selanne), a superstar talent putting up a (slightly) below-average number (Ryan Getzlaf), a guy who looks like he probably just got lucky over a few events (Dan Sexton). 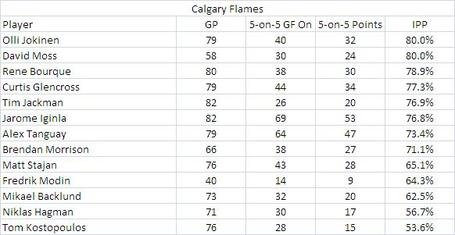 The Calgary Flames had eight guys with an above-average number in 2010-11, which is pretty surprising. Rene Bourque's decline this year was masked a bit by some percentages, while Niklas Hagman had the gods frown on him, which led him straight to the waiver wire. 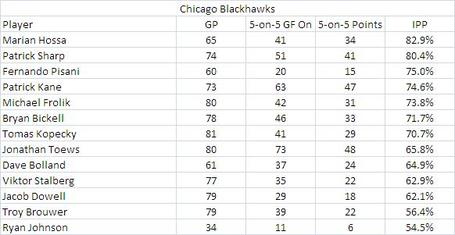 The top seven guys for the Chicago Blackhawks are all wingers, which suggests to me that Joel Quenneville likes to keep his center very high in the zone so that he can provide solid support defensively. As such, I'd be inclined to gives guys like Jonathan Toews and Dave Bolland a pass, even if their numbers do come in a bit below average. 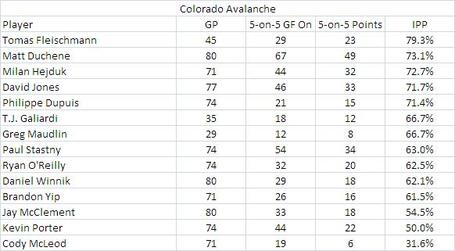 Tomas Fleischmann is at the top of the Colorado Avalanche list, but I think his placement there is a dubious, especially when you consider his 9.3% on-ice shooting percentage and 10.5% personal shooting percentage at five-on-five, both of which are significantly above average (though not outrageous). That injury he sustained may well have saved the Avalanche a bunch of money, which isn't to say that it cost Fleischmann - thanks Dale Tallon! Oh, and Cody McLeod has the lowest number of any player under consideration from either Conference. What's hockey's version of the Golden Sombrero? 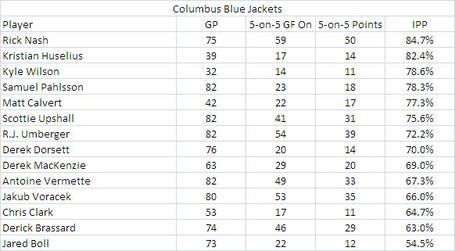 Super-rookie Matt Calvert came out with a bang here, and shot the lights out too (his on-ice shooting percentage five-on-five was 10.3% and his personal shooting percentage was 22.0%). His underlying numbers were pretty good, but I've got a nagging feeling that some regression might get talked into a sophomore slump. The recently-traded Jakub Voracek is also an interesting case. Over the last three seasons, Voracek has 104 points on 151 goals scored with him on the ice, which makes for a career individual point percentage of 68.9%. For a pass-first winger who's supposed to bring a lot of offense, that's not nearly as good as I was expecting. Maybe he's just not as creative offensively as I had thought. If so, the Blue Jackets probably did well when they decided to sell Voracek to Philly this summer (although I probably would've held on to him). 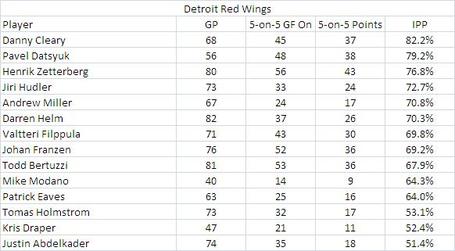 As we saw with the chart last week, Danny Cleary doesn't belong that high, which just goes to show that we don't really have enough events in one season to sift out the guys who are out of place. But Tomas Holmstrom, despite ending up near the bottom of the chart, isn't one of those players. One of the tricky things about this statistic is that playing alongside super-talented players who can put the puck in themselves will drop you down the list in a hurry. In that Holmstrom spends a lot of his time with Henrik Zetterberg and Pavel Datsyuk, his presence near the bottom of the Red Wings' list shouldn't come as much of a surprise.

I spoke about the Oilers at length last weekend, but I did want to point out how funny it is that, once again, Sam Gagner and Jakub Voracek seem to be mirroring one another. I mentioned earlier in this post that Voracek's career IPP is 68.9%. Gagner's? 69.8%. Maybe young Samwise is going to get traded after all.

Wayne Simmonds? Over his three-year career Simmonds has 83 points on 111 goals for an individual point percentage of 74.8%, but that includes this big season here. Simmonds is undoubtedly a good player, but the Kings probably did well to sell high and bring a long-term bargain in the form of Mike Richards. 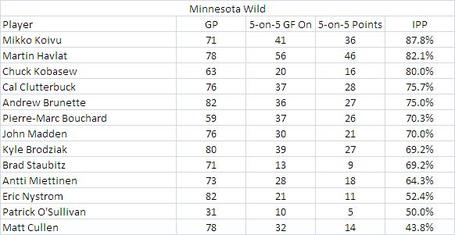 It seems to me that most Wild fans were pretty excited when they heard that Martin Havlat had been traded to San Jose for Dany Heatley even though Havlat led the team in five-on-five points by ten this season, and seems to have been a key cog in the offensive zone. It seems like the kind of thing that would be tough to miss even without the use of statistics, so I'm going to guess that the guy looked terrible defensively. And after years of Jacques Lemaire, if there's one thing that Wild fans know, it's forwards playing defense. 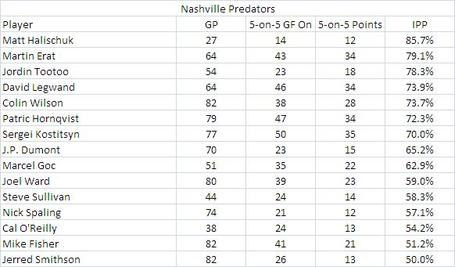 A bunch of the players listed here are no longer with the team. J.P. Dumont was bought out, and Joel Ward, Steve Sullivan, and Marcel Goc all left as free agents. None come out smelling like a rose by this measure, but that's an awful lot of secondary players the club is hoping to replace with youth. The Predators are mostly replacing those guys with youth from within, and a full season from Mike Fisher. No doubt, they're hoping that his number year is a reflection of their buying low as opposed to a reflection of thier buying over the hill.

No one over 73.8% is kind of bizarre. But then again, no forwards with more than 38 five-on-five points is also kind of bizarre. That bests the Predators (money-poor) and the Oilers (hockey-poor) in the West, but on one else. I'm going to go ahead and guess that Keith Yandle is going to look awesome by this measure when I get around to looking at defensemen. 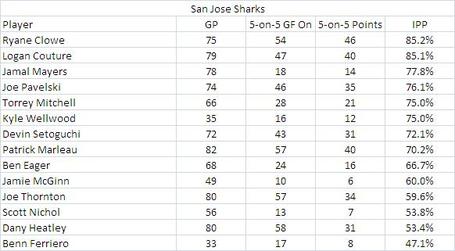 Both Joe Thornton and Dany Heatley had terrible season by this measure, but Thornton really stands out to me because he's a play-maker and because in previous seasons, he's been close to or above 80% (i.e. elite). Despite this decline, Thornton finished twenty-fourth in league scoring, the first time he's been outside of the top twenty since 2001-02. I wouldn't bet on it happening twice in a row. The other player to watch is Logan Couture. On the one hand, you know that number is going to come down at least a little bit. On the other hand, he's just getting his feet wet in the league, and he was in the top thirty for shots on goal five-on-five, so maybe we'll see that this one has some sustain.

David Backes had an awful year, but we know from his history he'll bounce back. Alex Steen was so good that we know he'll be heading back toward average. But what of the recently-acquired Chris Stewart? 79.5% looks high, but his rate over three seasons is 79.8% on 124 events. Some guys get lucky three years in a row. Other guys are just plain good. The Blues gave up on Erik Johnson to grab him, so they no doubt feel it's the latter. 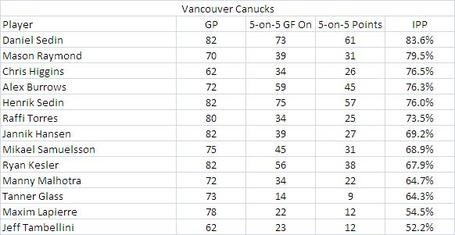 The biggest surprise for me is that Alex Burrows isn't completely buried beneath both Sedins. I've watched this team quite a bit now, and even though Burrows is quite obviously involved in the offense, and that he's at least a decent player, I never quite get the sense that he's anything more than that. I think I've said this a few years running now, but it seems that I'm not giving the Burrows enough credit.