Events and Time on Ice

Share All sharing options for: Events and Time on Ice

In an effort to learn about how much ice time players get in the CHL, I recently decided to use events per game as a proxy. At the NHL level, there's a strong correlation between the two measurements, which suggests that this is something we can work with going forward. Of course, that's not to say that there aren't problems. One problem is that we're using information from one league to interpret data from another league. In this case, the key piece of information is goal events in five-on-five hockey. This is problematic because each league, and even individual teams within each league will have different scoring rates. Sure, a player who's on the ice for 1.5 five-on-five events per game might usually equate to 13.3-17.3 minutes per game on a team that registers 3.85 five-on-five events per game, but what about a team where there's four and a half, five, or even six five-on-five events per game? After the jump, I'll try to offer a solution to this problem.

Even at the NHL level, there are substantial differences from team to team in how many five-on-five events are registered per game. Take a look (with thanks to Gabriel Desjardins' behindthenet.ca): 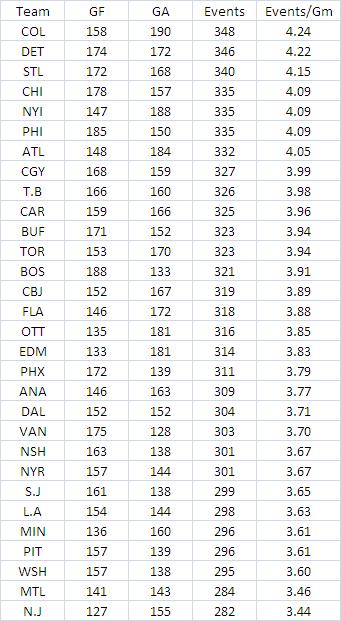 That's a pretty big range, and it seems like it will have a somewhat significant impact on some outcomes. For example, if all I knew was that one player from the Devils and another from the Avalanche were both averaging 1.00 events per game, I'd feel pretty confident in saying that the player from the Devils was getting more ice time. Seems like there's room for improvement here.

So how do we solve this problem? Well, I decided to go through the numbers again, and instead of using events per game as a proxy for ice time, I used the percentage of team events, which is simply player events per game divided by team events per game. Now, most players don't play in every game, so ideally I'd only be using the games that a player actually played in for "team events per game", but that would have required a lot more number crunching, so I took the shortcut and used each team's full season for every player. 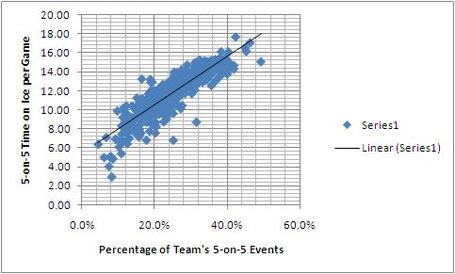 The chart doesn't look significantly different from the one that we saw a couple of days ago, but that's still a great result. That the correlation improves slightly when we take the number of goals the team scores into consideration means that we'll be able to more successfully use this formula when comparing across leagues where the number of goals might be significantly different.