Share All sharing options for: How Well Do Scoring Events Reflect Ice Time?

Pretty simple question. Earlier today I wrote about Ryan Nugent-Hopkins, and one of the questions that I was trying to (at least partially) answer was the ice time question. Just how much of it did Nugent-Hopkins get? In trying to provide an answer I turned to scoring events, and noticed that Nugent-Hopkins was in a group of five forwards who led the Rebels in events per game, which led me to the conclusion that he was probably also one of five forwards who led the the Rebels in ice time per game. The fourth line players, meanwhile, didn't have many events five-on-five, which led me to the conclusion that they probably didn't play that much.

There were some objections to this methodology, but basically it boiled down to the fact (and it is a fact) that good players, in general, will have more events per unit of ice time than bad players. As such, we don't really know what it means when we see some of the Rebels' top players with more events per game than the poor ones. After the jump, I'll try to provide us with a frame of reference.

It would have been great to (as was suggested) compare the Rebels with other teams in the WHL. Unfortunately, the data isn't freely available. I tracked Red Deer's scoring events by hand, and don't really want to do that for the whole league! Fortunately, there are other leagues where this data is freely available, like the NHL, where, thanks to Gabriel Desjardins' behindthenet.ca, the five-on-five data is at our fingertips. 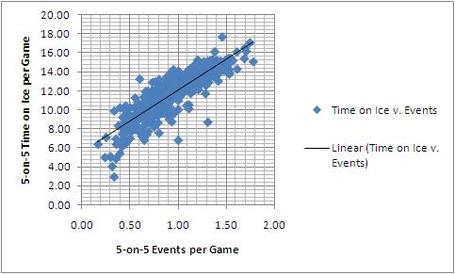 It looks to me like there's a pretty strong relationship. Now, obviously every little blue dot (there are 454, one for every player in the 2010-11 season who had at least 10 five-on-five events) isn't right on top of the black line, but the Pearson correlation of 0.86 does in fact indicate that these two variables tend to move in lockstep, at least at the NHL level. That means that if we only have one variable, we can make a pretty good estimate for the other, and that if we used a four-minute range, we'd be right a whole lot more often than we'd be wrong.

Now let's take another look at those numbers for the Rebels, but this time we'll include an estimated ice time in the chart. Now, I did include 4-on-4 events with the Rebels, so we're looking at an estimate for all EV ice time per game here, not just 5-on-5, and the inclusion of 4-on-4 time might overstate the ice time a little in the final number. Still, it should provide a pretty good idea:

Is this system ideal? No. The big assumption here is that junior hockey is going to have this relationship in about the same measure as the NHL. It's an assumption I'd rather not make, but for now, it beats the alternative (lots and lots of counting). Plus, the median guess fits quite well with what we've heard from others and plain old common sense. If running four lines means that the fourth line is playing about eight to nine minutes per night while the top guys play closer to fourteen plus special teams, that seems believable to me. I now feel more confident that Nugent-Hopkins was getting significantly more ice time than most players on his team (both at evens and overall), and also feel reassured that he wasn't getting run out there for close to twenty-five minutes per game either.