Share All sharing options for: Individual Point Percentage in 2010-11

The 2010-11 season has been in the books for a while now, but I've just gotten around to looking at the individual point percentages from that season today. Individual point percentage is a caluclation of the number of times an individual player gets a point (either a goal or an assist) relative to the number of total goals scored while he's on the ice. So, for example, if a player is on the ice for fifty goals-for over the course of the season and he gets a point on forty of them, his individual point percentage would be 80%. I was first introduced to this statistic by Tyler Dellow who figured (quite rightly) that points alone don't tell us who's driving the play in the offensive zone, and that this little statistic might provide some help.

After the jump I'll look at the individual point percentage for all of the forwards who played at least 50 regular season games in each of the last four seasons, and look at the best and worst performers from 2010-11.

A lot of the really good offensive players in the league will find a home near the top of the chart, which is exactly what we'd expect from a statistic that tries to tell us about players that drive the play. You'll also notice that the year-to-year variation is quite high. Over a long period of time, the cream mostly rises to the top, but in any one season, you can get some funky results, similar to the kind of thing we see with shooting percentage.

The average individual point percentage for a forward who's played at least fifty games in each of the last four seasons (there are only 162 of them!) is 69.6% and the median is 69.8%, so that should provide some idea of whether or not a player is doing well. Any time a player deviated substantially from his four-year average, I've marked that in the chart below in either red (down year) or green (up year). The data I'm using is from five-on-five play only and the raw data comes from Gabriel Desjardins' behindthenet.ca: 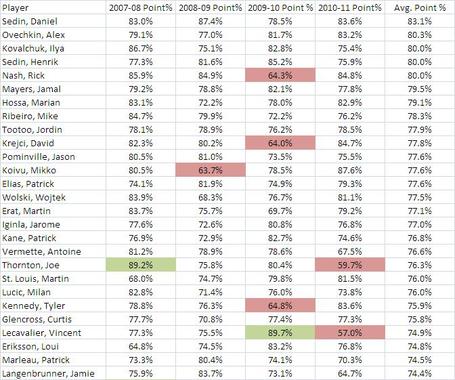 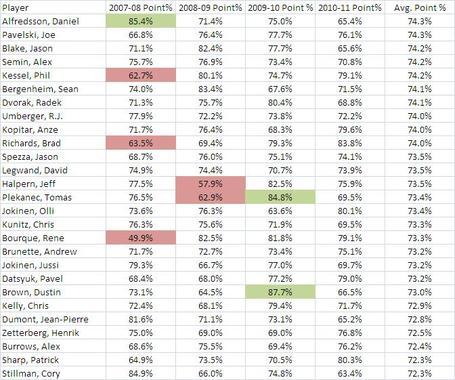 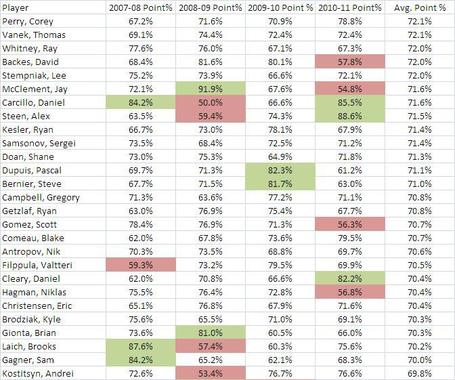 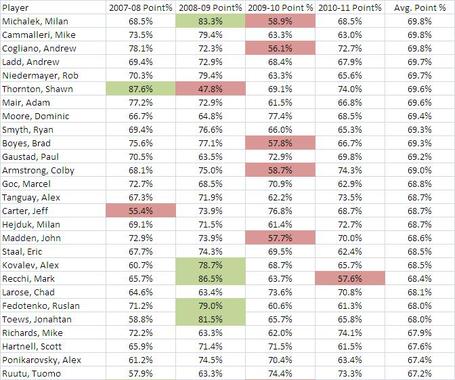 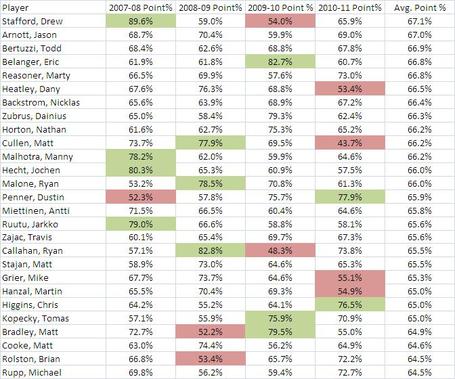 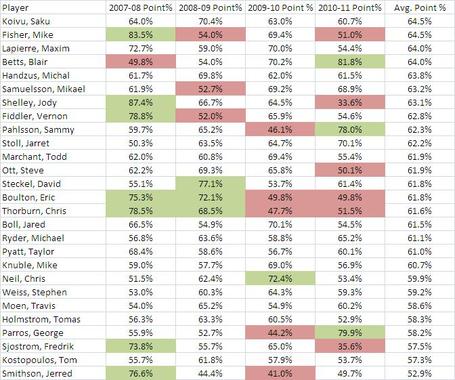 The list is largely what you'd expect with the stars cluttering the top of the chart along with a couple of fourth line surprises who only have a small sample of events in each season. Some of the top players missing from the top of the list also perform very well: Sidney Crosby, for example, was the league leader from 2007-08 to 2009-10, and was humming along at 89.0% last season before going down with a concussion. But the list passes the smell test: for the most part, the men at the top of this list are the players driving the play.

So what about those famous names a bit further down? Well, there's only one puck, and the best players tend to handle it a lot, which means that some top line players are necessarily going to be passengers, or will be required to cheat for defense while their linemates run wild (that both Sedins are in the top five by this measure while playing almost exclusively on the same line is amazing). Tomas Holmstrom, for example, generally plays with some pretty gifted players, so he's not going to be handling the puck a whole lot. Other surprising names who are below average by this measure include Stephen Weiss (who I've got to think must be cheating for defense), Dustin Penner (who looks like he had terrible luck in his first two years in Edmonton; tremendous luck in his last two years; or changed the way he played in the offensive zone in the last two years), Nicklas Backstrom (excellent player, but it's no surprise that Ovechkin is the guy driving the bus offensively), Jonathan Toews (his team has got a lot of explosive wingers who may be taking precedence in the offensive zone), and Dany Heatley (who had one of the worst seasons by a fifty-game forward in 2010-11). 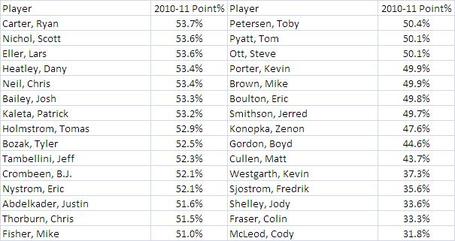 Man, does Heatley ever look out of place. For the most part, we're looking at goons and plugs, but you've also got Heatley, Matt Cullen, and Mike Fisher, all guys who might be due to bounce back from some terrible luck or who may have lost a step or two. But as an Oiler fan, it's hard not to notice old Broken Foot Fraser down in second-to-last. His hard-luck off-season was preceded by some truly terrible luck on the ice: an on-ice shooting percentage of 6.12% five-on-five, and when the puck did go in, he wasn't getting any points. I'm not saying that Fraser is going to be a fantastic player or anything (far from it), but if he can keep an NHL job, he's due for a rebound, at least in terms of points.

There are some more relevant familiar faces on the list of guys at the other end too: 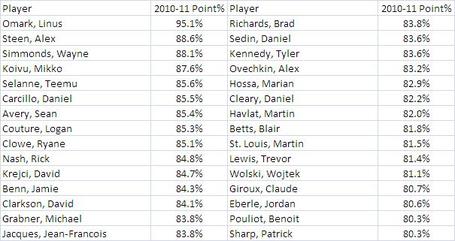 Linus Omark leading the pack! Omark had 19 points on the 20 goals scored while he was on the ice, which is a rate that simply isn't going to continue. At the same time, it does fit with my impression of Omark: the guy always wants the puck.

Jordan Eberle, meanwhile also puts up a big number, which is both encouraging and worrying. It's encouraging because that's about where he'll settle in if he ends up being an elite offensive driver in the NHL. It's worrying because an above average individual point percentage and above average individual shooting percentage (he shot 9.7% five-on-five) in a player's rookie season can lead to some pretty unrealistic expectations (just ask Sam Gagner). And as you can see by looking at the names on the list, any given year is a mixture of men who belong (Daniel Sedin, Rick Nash, Alex Ovechkin), young guys who might (Eberle, Michael Grabner, Claude Giroux), and guys who absolutely do not (Jean-Francois Jacques). We can only hope that as time goes on, Eberle shows that he belongs.

Up for tomorrow: a look at the rest of the Oilers' forwards.