After laying out the lineage of the current crop of NHL General Managers, the next logical step was to root through the family trees of the current crop of NHL Head Coaches. To be honest, the chart doesn't represent the true intermingling of the coaching profession. I tried to connect the men who've worked together with red and blue lines to keep things legible, but I just ended up with something resembling graph paper, as drawn by Mondrian.

This is not a comprehensive chart by any means (I'm working on that beast), but it does trace the origins of each of the 30 active NHL coaches.

*Click to enlarge the chart below. Get the full-sized chart here. A yellow block indicates the start of the lineage that follows and each man in yellow is the head of their own line. 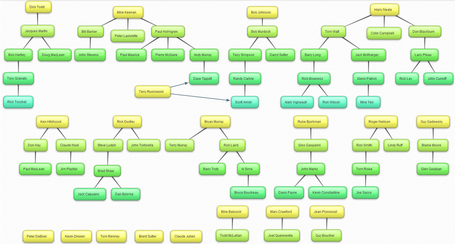 If I've overlooked any connections or you know of a better origin for any of the men on the chart, please let me know in the comments.