Defensemen on the Power Play

Share All sharing options for: Defensemen on the Power Play

We've been talking about the Oilers' terrible power play in the last several days, and in particular, how much responsibility for that terrible power play belongs at the feet of Ales Hemsky. Hemsky has been the main cog in the Oilers' first unit when healthy for the last several seasons, so on the surface, it seems natural to give him a fair share of the blame. But when you look at his tremendous talents, and his results at even strength, it's hard to believe that Hemsky is one of the main problems.

Still, it's obvious that there's a problem, and if that problem isn't Hemsky, what is it? A few days ago, Derek suggested that maybe it's the other guys on the ice. My main objections to this line of thinking were that (1) the other guys on the ice don't get nearly as many touches as Hemsky, and so don't have as much of  an impact, and (2) the other guys have played almost exclusively in Edmonton, so we don't have much evidence that they can't do better as part of a different first unit. But that second objection is really only true of Edmonton's forwards. On defense, there's actually been quite a bit of variation in the last five years, and many of the players who played on Edmonton's power play have played on the top power play units of other teams as well. After the jump, I'll look at how their results compare.

In the chart below, I've grabbed all of the defensemen who played on the Oilers' first power play unit who have also played elsewhere in the last five seasons (each player gets his own color). I would have liked to have used data from 2005-06 (when the Oilers had a pretty decent power play), but couldn't find the necessary information for that season, and so we're stuck looking at 2006-07 through to 2010-11. Because I took this data from Behind the Net, any seasons that were split between two teams are excluded. The players involved are Sheldon Souray, Lubomir Visnovsky, Jarrett Stoll, Joni Pitkanen, Ryan Whitney, and Kurtis Foster, and the chart is organized by goal differential per sixty minutes of ice time at five-on-four. Let's see how they did: 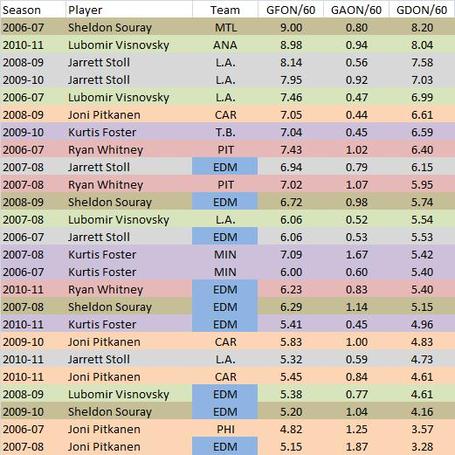 There's a very bad pattern here. Five of the six players had their worst year(s) with the Oilers (although Ryan Whitney was worse in the season he split between Pittsburgh and Anaheim). The exception is Jarrett Stoll who had one bad season with the Kings, and two that best his time in Edmonton. Whether it's Hemsky, the other forwards, the coaching, or all of the above, these point-men all seem to be part of more effective units elsewhere.

Now, this doesn't necessarily mean that guys like Penner, Horcoff, and Gagner (and Hemsky for that matter!) would also be better on other teams, but I think it helps to support the idea that we'd be silly to rule it out. Still, I don't think we know much more now than what we already knew (unless you didn't already know that Joni Pitkanen kind of sucks on the power play): the Oilers are consistently awful, and even though a new player comes in to man the point almost every year (this year it's Cam Barker), the guys on the blue-line don't seem to be the problem.