How Much Are They Spending on Oklahoma?

Share All sharing options for: How Much Are They Spending on Oklahoma?

One of the big positive changes that the Oilers have made since Steve Tambellini joined the organization is putting more emphasis on the success of their AHL team. The lack of success in Springfield is one of the reasons that Kevin Prendergast was let go, and since that time, there's been an obvious change in strategy, but the first post-Prendergast seasons didn't turn out too well - the Falcons were still terrible. Last season, the Oilers opened up shop in Oklahoma City, and made sure that they'd have some success by spending more than their opposition. With the opening roster for 2011-12 pretty much set, how does this year's squad compare?

With that in mind, here's a comparison of the projected roster to last year's group on opening night (estimated salaries are highlighted in yellow): 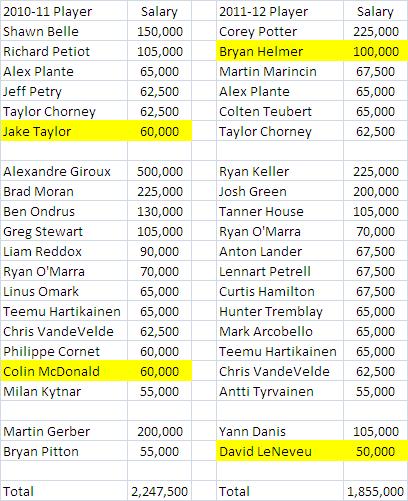 The team is spending more on defense, but less up front and in goal, and the overall spending on player salaries has been chopped by 17.5% with pretty much all of that coming from a less expensive option in goal and the lack of a superstar forward up front. Interestingly, the team's depth up front is probably improved - Kytnar and Cornet were both in last year's opening night lineup, both are probably better players today, and I've got both of them starting in the press-box (though I only have Kytnar there because I think that's the likely outcome, not because I think he deserves it).

But losing a star like Giroux is going to hurt in a way that having a bunch of guys capable of playing third or fourth minutes just won't solve. Last season, he, Colin McDonald, and Brad Moran were often lining up in a power-v-power set at evens and doing well. On the power play, they were the team's difference-makers. The club's new additions will certainly help, but this team is likely going to have more trouble scoring than last year's squad.