Share All sharing options for: We're Still The Best!

The last time I put this most beautiful of all charts up, a Maple Leafs' fan complained that looking at playoff results since the lockout is completely arbitrary and instead suggested starting way back in 1993. Now, I can sort of understand the complaint that a post-lockout look is arbitrary, but given the state of the league today, I also think that it makes a lot of sense (certainly a lot more sense than 1993). First of all, the salary cap was instituted after the lockout, and I think that's changed the way that pretty much every team in the league does business. It seems reasonable to me to look at what teams have enjoyed success since that change. Furthermore, there have been thirty established NHL teams every year since the lockout, which provides a fair comparison for all of the franchises that are currently in the league, something that is definitely not the case if we look back further. But the real objection to starting with the 2005-06 season isn't that it's arbitrary; the real reason will become all-too-clear with one look at the chart, which details how each team has done in the playoffs since 2005-06. 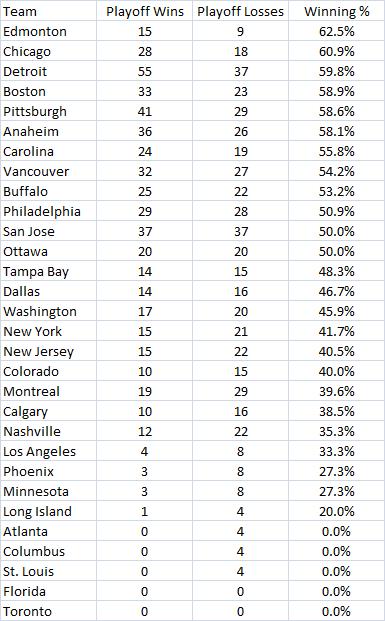 There's just so much to love in this chart: