After finishing up with the 2010 draft yesterday, we'll move on to the 2009 draft today, and once again use Gabriel Desjardins' NHL equivalencies to see which forwards look like they're turning into quality offensive players two years out. This draft includes stellar prospects like Magnus Paajarvi and Anton Lander, as well as some of the Oilers' lesser lights in Toni Rajala and newly-signed enforcer, Cameron Abney. How do these guys look compared to the other members of their draft class? We'll take a look after the jump.

Before I go ahead and put up the chart, a bit more explanation is needed. Not all of the players drafted in 2009 were actually the same age; in fact, several players had already passed through the draft at least once (and sometimes twice). All of these older players are included in the chart but are marked in yellow. Other players were first eligible in 2008 or 2009, but weren't actually drafted until 2010 or 2011. I've also included these players in the chart with "N/A" written in the "Draft Number" column, and if 2009 was their first year of eligibility, the yellow highlighting disappears. Further, the "Draft Number" column is not the player's actual draft position but the player's position among forwards. So, for example, Magnus Paajarvi was taken 10th overall in 2010, but he was the 7th forward to be drafted, so his "Draft Number" in the chart is "7". The "Team" column is the team that drafted the player in 2009, not the team that has that player's rights today (Jeremy Morin, for example, is listed under Atlanta even though Atlanta doesn't exist anymore, and the player's rights belong to Chicago). In addition, these numbers may be slightly different than the NHLE numbers you may have seen elsewhere for these players. That's because I include both regular season and playoff games in the results, which I think probably gives a better estimate of each player's real level of ability. Most of these teams aren't playing a balanced schedule anyway, so it seems to me that including the larger sample of games is the way to go. Finally, the "Rank" column is organized by NHLE. I broke the chart into five portions so that it would be easier to read, but it's still quite small.  You can click on a segment if you want to enlarge it. 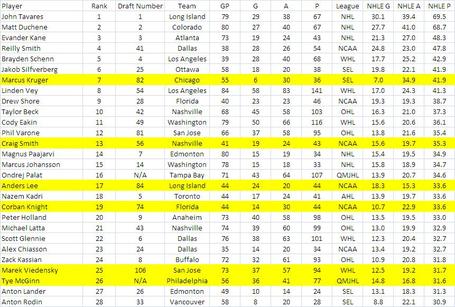 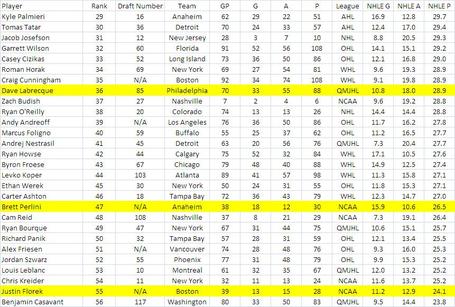 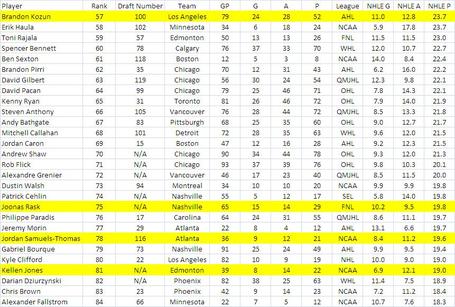 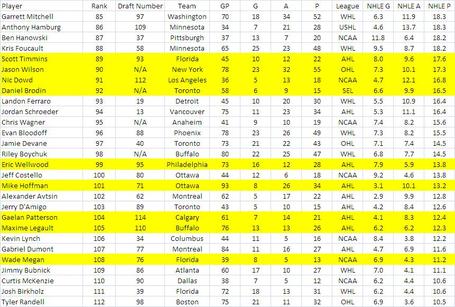 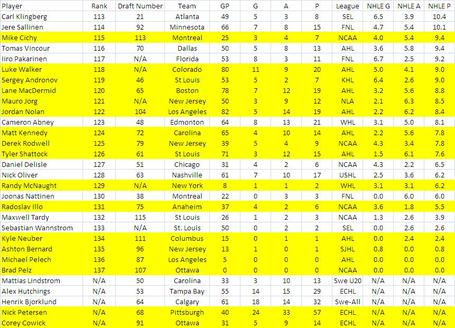 One thing we learn at this stage is just how difficult it is to succeed in the American Hockey League. In the summer of 2010 Brandon Pirri was coming off a monster season in the NCAA, and had the 7th-best NHL equivalency of anyone in the draft class. After transitioning to the AHL, he's fallen all the way to 62nd even though he had a decent pro debut (43 points in 70 games). Jerry D'Amigo is another player who made the jump from the NCAA to the AHL, and really struggled against the professionals, posting just 15 points in 43 games before getting shipped to the OHL. He was 14th on this list summer, and fell all the way to 103rd. Of course, if we use his numbers with the Kitchener Rangers - 37 points in 28 games - his NHLE skyrockets to 32.5, good enough for 24th. The bottom line: with players this old, it's nice to see them dominating in the CHL or the NCAA, but the guys you can really trust are the guys posting big numbers in a professional league. Still, full marks to Steve Whyzerman and the Lightning for taking Ondrej Palat in 2011 with one of the very last picks in the draft. It might be that he just had the one big Couturier-aided year, but you know what, when you're picking in the 200s, a guy who scored as well as Palat is about as good a bet as you're going to get.

So other than the NHL'ers, who are those guys doing well in the pro leagues? Jakob Silfverberg put up a huge season in the Swedish Elite League, and could be a tremendous two-way player in the NHL. His scouting reports have always mentioned his hockey sense, and willingness to provide support defensively, so if we add excellent offense to that equation, it would seem to me that the Senators have reason to be excited. Marcus Kruger is an overager, but he's another player who's had a great deal of success in Sweden. He had his first taste of NHL action with the Blackhawks, and while his stat line isn't particularly impressive, I think he's likely to make the team out of camp, and may get a chance in Joel Quenneville's top nine. Finally, Nazem Kadri had the best AHL season of anyone from this draft class, and as I mentioned earlier, that's an awfully tough league. That he was the team's second-leading scorer despite only playing in 44 games - and runaway leader in points per game - also lets you know that the Marlies weren't exactly bulging at the seams with offensive talent: yes, he's a little further down the list than you'd probably like, but it seems to me that he's still a high-quality prospect.

The NHL'ers also deserve plenty of slack. Last year at this time Evander Kane was taking some guff, but he had scored virtually all his points at even strength. This year, with a bit more opportunity in offensive situations, he's back to being ranked where he should be. So my brain is giving a little bump to guys like Marcus Johansson, Jacob Josefson, Ryan O'Reilly, and Kyle Clifford who's NHL "equivalencies" are actual NHL results.

As for the Oilers, Magnus Paajarvi fell a touch in the rankings, but he was playing in the NHL, and we know from watching that he wasn't often getting top-quality teammates. All in all, a very good rookie season for the young Swede. Anton Lander, meanwhile, comes out of this smelling like a rose. He's punching right around his draft number in terms of offense, and that's never been his calling card, so I'm very pleased indeed with his progress in this area. Toni Rajala is one of many guys who are "also in picture". About the best you can say for him here is that he posted those results against men. Finally, we've got Abney. And we've got him for three. more. years.