Yesterday, I spent some time looking at all of the forwards who were drafted this past June using Gabriel Desjardins' NHL equivalencies. But draft day isn't the end of the journey for these young players, and so over the next few days, I'll take a look at the players who were drafted in 2008, 2009, and 2010 to see how those players have progressed. Today, I'm going to look at all of the forwards who were drafted in 2010, a draft that many think was an absolute gem for Oilers' head scout, Stu MacGregor, at least partially because of the seven forwards he picked up: Taylor Hall, Tyler Pitlick, Curtis Hamilton, Ryan Martindale, Drew Czerwonka, Kristians Pelss, and Kellen Jones. I think we can honestly say that each of these players have progressed, but we can get a better idea of how well they're progressing by comparing them to their peers. After the jump, we'll do just that.

Before I go ahead and put up the chart, a bit more explanation is needed. Not all of the players drafted in 2010 were actually the same age; in fact, several players had already passed through the draft at least once (and sometimes twice). All of these older players are included in the chart but are marked in yellow. Other players were first eligible in 2009 or 2010, but weren't actually drafted until 2011. I've also included these players in the chart with "N/A" written in the "Draft Number" column, and if 2010 was their first year of eligibility, the yellow highlighting disappears. Further, the "Draft Number" column is not the player's actual draft position but the player's position among forwards. So, for example, Tyler Pitlick was taken 31st overall in 2010, but he was the 22nd forward to be drafted, so his "Draft Number" in the chart is "22". In addition, these numbers may be slightly different than the NHLE numbers you may have seen elsewhere for these players. That's because I include both regular season and playoff games in the results, which I think probably gives a better estimate. Most of these teams aren't playing a balanced schedule anyway, so it seems to me that including the larger sample of games is the way to go. Finally, the "Rank" column is organized by NHLE. I broke the chart into five portions so that it would be easier to read, but it's still quite small.  You can click on the chart if you want to enlarge it. 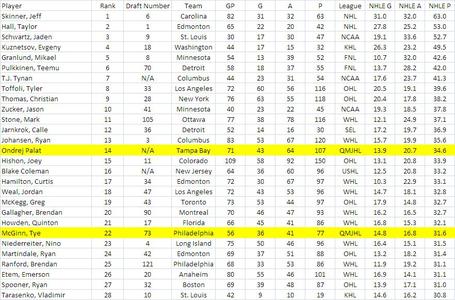 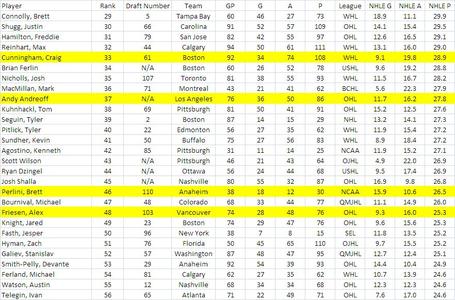 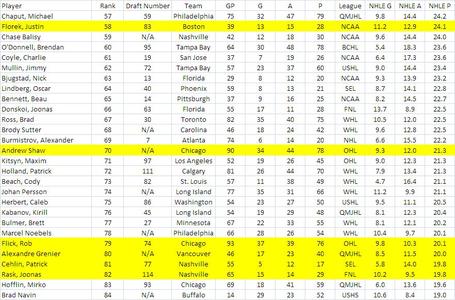 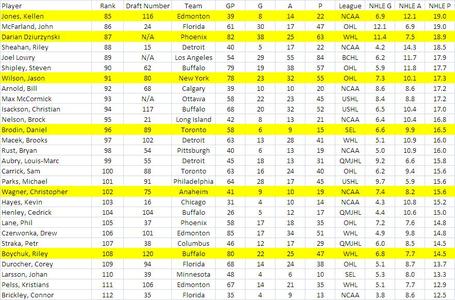 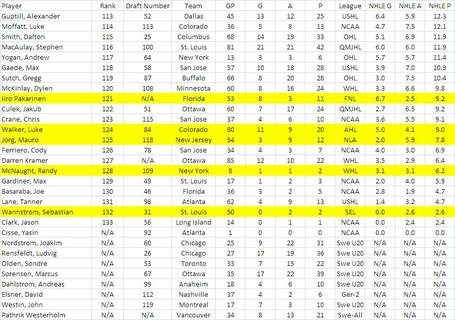 One of the interesting things about this draft is that the top ten forwards drafted are all over the map. Jeff Skinner, Taylor Hall, Jaden Schwartz, and Mikael Granlund take four of the top five spots, but then it's a big jump down to 13th before we hit Ryan Johansen, which is actually a small jump up the list for him, and given his other qualities, I don't think there's any reason for concern. Next up is Nino Niederreiter in 23rd, and it seems to me that offense should be something of a concern with him. It was a bit on the low side when he was drafted, and he didn't have the jump up this chart that I was expecting from one of the youngest players in the draft class. Vladimir Tarasenko is in 28th, and had a pretty disappointing KHL season, especially when compared to fellow-Russian Evgeny Kuznetsov who had a dominant second half in Russia (8-9-17 in 13 games). Brett Connolly is next in 29th, and it seems like injuries may have robbed him of some of his ability; if I were the Lightning, I'd be at least a little bit concerned. Tyler Seguin clocks in at 39th, but that's got everything to do with the fact that he played on a very strong NHL team, and not much to do with his actual ability. One of the weaknesses with NHLE is that it works on averages, so players need to be looked at in context when we examine the results. A little bit of common sense tells us that Tyler Seguin is just fine. Last, we have Alexander Burmistrov way down in 69th. Like Seguin, he played a full year in the NHL and didn't get much time on the power play, but he wasn't that strong statistically in his last OHL season either, so I'm less inclined to just give him the benefit of the doubt. He's a guy that will need to put up numbers before I'll believe that he's going to be an impact player offensively in the NHL.

The Oilers come out of this draft looking pretty good, but there are some concerns as well. Taylor Hall, Curtis Hamilton, and Ryan Martindale all had fantastic seasons in 2010-11. We all had the opportunity to see Hall play in Edmonton, and his quality is obvious. We didn't get to see as much of Hamilton and Martindale, but at least statistically, both players delivered quality offensive seasons in which they passed several prospects from this time last season. Hamilton was ranked 63rd in this group by NHLE after the 2009-10 season, and he moved all the way up to 17th. Martindale was ranked 31st, and has moved up 24th. Even allowing for some of the fact that a couple of the guys behind them on the chart are obviously ahead of them in reality (NHL'ers like Tyler Seguin and Alexander Burmistrov, for example), I think it's fair to say that both players are tracking very well. But that's where the really good news ends.  I expressed concern about Tyler Pitlick's offense last summer, and that hasn't changed with a good-but-not-great year in the WHL. Yes, Pitlick did better than a point per game pace, but that's nothing special at this point, and for such a high pick, I think it's fair to hope for more. After all, a point-per game pace in the OHL or WHL gives an NHLE of 24.6, which is only good enough for 54th on this list, and there just aren't going to be 54 forwards from this draft who have an NHL career. That should also help put the progress of guys like Pelss, Czerwonka, and Jones into perspective. It's great that they improved, but none of them look particularly special beside the other players in their draft.

As for some of the players I mentioned yesterday, T.J. Tynan looks pretty darn good beside players his own age. Size is definitely a concern, and he may regress after an outstanding 2010-11, but Tynan looks like an awfully good third round pick by the Blue Jackets. Apart from Tynan and Blake Coleman, the rest of the overagers from 2011 don't look nearly as good when compared to players their own age. Brian Ferlin, Ryan Dzingel, and Josh Shalla were all in the top 25 of the 2011 list, but they all fall out of the top thirty on this one. That doesn't make them bad picks, but they were flattered by the comparison to younger players.

Finally, the five longshots that NHLE liked before the 2010 draft are still showing quite well today. Jordan Weal got beat down from 6th in 2010 to a still-strong 18th without running-mate Jordan Eberle by his side. Still, he's a guy that will need to show he can score in the pros before he makes believers of most people. Another Kings' pick, Tyler Toffoli, actually moved up from 10th to 8th, and stirred the drink (or at least that seems to be the conventional wisdom) on one of the most dominant lines in the OHL. Greg McKegg also shows well again moving down from 8th in 2010 to 19th in 2011 after a second consecutive strong season in the OHL, this time as the captain of the Erie Otters. He's followed closely by Brendan Gallagher in 20th, down from 13th in 2010. Like Weal, there are concerns about his size, but at 147th overall, I've got to think that the Montreal Canadiens are thrilled. And finally Justin Shugg moved down from 20th to 30th on the list. It's not a tremendous showing, but his numbers are brought down by a long playoff run and tough time in the Memorial Cup (his NHLE of 32.4 using just regular season results would have been good enough for 21st).