Share All sharing options for: 2011 Draft - Forwards and NHL Equivalencies

One of my favourite tools in evaluating prospects is Gabriel Desjardins' NHL equivalencies. The basic premise is that we can expect each player to bring a portion of his offense with him from the league he played in last year were he to make the jump to the NHL. By observing how much offense other players brought from these other leagues in the past, we can estimate how much offense (on average) to expect from players from those leagues in the future. It's an imperfect assessment of player skill for sure - we're just measuring offense after all - and I think it's generally a better measure for forwards than it is for defenders (and goalies!), but it's one indicator as to whether or not players will one day find success in the NHL. It also gives us a tool to compare players in different leagues, although with young players it makes sense to cut the guys playing in the top professional leagues some extra slack. After the jump I'll explain the system with a bit more depth and look at the performance of each of the forwards drafted in 2011 from last season.

Before I go ahead and put up the chart, a bit more explanation is needed. Not all of the players drafted in 2011 were actually the same age; in fact, several players had already passed through the draft at least once (and sometimes twice). All of these older players are included in the chart but are marked in yellow (which should help everyone to understand why their team passed on T.J. Tynan). Further, the "Draft Number" column is not the player's actual draft position but the player's position among forwards. So, for example, the Oilers drafted Tobias Rieder 114th overall, but he was the 71st forward to be drafted, so his "Draft Number" in the chart is "71". In addition, these numbers may be slightly different than the NHLE numbers you may have seen elsewhere for these players. That's because I include both regular season and playoff games in the results, which I think probably gives a better estimate. Most of these teams aren't playing a balanced schedule anyway, so it seems to me that including the larger sample of games is the way to go. Finally, the "Rank" column is organized by NHLE.  The second number in brackets includes all of the players who don't have an NHLE ranking and inserts each one according to his draft number. I broke the chart into four portions so that it would be easier to read, but it's still quite small.  You can click on the chart if you want to enlarge it. 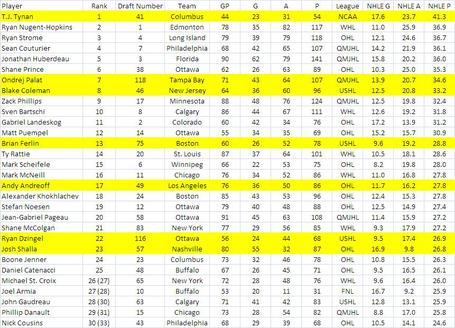 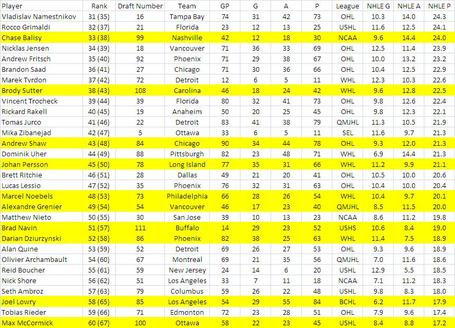 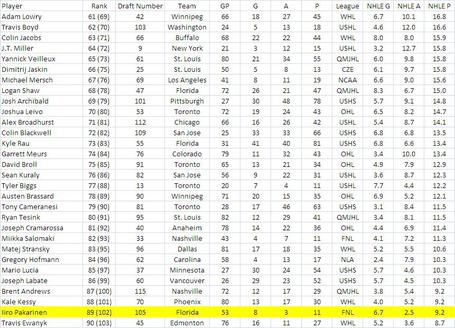 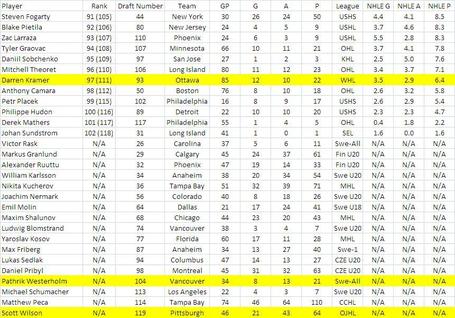 The first thing that stands out to me is T.J. Tynan who was eligible to be drafted for the first time in 2010, but passed through despite a pretty good season in the USHL (17-55-72 in 60 USHL games). At 5'9'' size is definitely a concern, but that rookie season with Notre Dame is phenomenal. The CCHA is no joke, so I'd say that Columbus did very well for themselves. The other overager that stands out to me is Ondrej Palat who passed through both the 2009 and 2010 drafts. He was Sean Couturier's linemate in Drummondville, so there's got to be some concern that he was getting zoomed playing with the big center, but picking him up with the fourth-last selection in the entire draft seems to me like a highly worthwhile gamble.

The team that looks the best by this measure is Ottawa. The Senators have four of the top twenty players in the chart, and all four were eligible for the first time this season... and that doesn't even include their top-ten pick! Matt Puempel and Stefan Noesen were both high picks, but Shane Prince and Jean-Gabriel Pageau were both taken later in the draft. Prince fell mostly because of size, quality of teammates (he played with Tyler Toffoli and Ryan Martindale on a line that was just plain dominant), and a perceived lack of defensive awareness. Still, that offense he posted is only a touch lower than the very top of this year's class. Pageau fell for similar reasons, and his offense isn't quite as good, but it's worth pointing out that Pageau led his team in scoring during both the regular season and the playoffs. And as for Mika Zibanejad, well, he looks like a huge reach in the top ten, and I'll confess that I probably wouldn't have taken him there, but he was playing in the Swedish Elite League, so he probably deserves at least a little bit of slack.

As for the Oilers, their draft looks pretty good to me, but the third round smells. They took a goaltender, which is never something I like in the top hundred picks, and then followed that with Travis Ewanyk who, as you can see, has pretty much no offense. I like most of the rest of their draft, but it looks to me like the success or failure on this year's crop will depend a lot more on the defenders than it will on the forwards (with the rather large exception of Ryan Nugent-Hopkins).

Finally, I did this same exercise a year ago, so we can compare this year's results to last year's in order to get some sense of what kind of depth the 2011 draft had compared to 2010. In 2011, nine players who were eligible to be drafted for the first time in 2011 (and were actually drafted!) had an NHLE of 30.0 or better, and another thirteen were between 25.0 and 29.9. That compares favourably to 2010 when eight players were clear of 30.0 and another nine slotted in between 25.0 and 29.9. On the other hand, four players from the 2010 draft had a better NHLE than Ryan Nugent-Hopkins who was the top player in 2011. So at least by the numbers, the forward depth in 2011 looks to have been a little bit better even though the very top of the draft was quite a bit weaker.