Hope in the Form of the Tampa Bay Lightning

Share All sharing options for: Hope in the Form of the Tampa Bay Lightning

The Edmonton Oilers were a bad team last year. Other teams had better scoring, better defense, better goaltending, better special teams, and... you get the idea. But 2010-11 is of a new season, and this team might just be better. The team hasn't made many changes in key positions, but if ever there's a time to be optimistic, it's before any crooked numbers are in the actual standings. One team that I look to for encouragement in this regard is last year's Tampa Bay Lightning.

The Lightning weren't a team that saw a lot of change from one year to the next at the top of their roster: 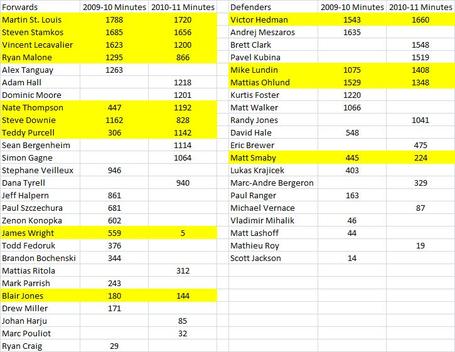 Three of their top five defenders were on the roster in significant roles a year ago, and seven of their top nine forwards spent time on the NHL roster as well - Adam Hall, who played the third-most minutes in 2010-11, played all of 2009-10 in the AHL on an NHL contract - although a couple of players were put into more important roles. The goaltending picture changed drastically, but that didn't do anything to help the Lightning in the first half of the season especially.

But the results at even strength were much, much better. In 2009-10, the Lightning earned just 45.8% of the Fenwick events with the score tied, which is just awful. In 2010-11, they improved to 52.2% of the Fenwick events, which is actually very good. They did this despite icing a lot of the same players in the most important positions. So what caused the huge swing? Is the answer better depth at forward? Were the threesome of Meszaros, Foster, and Walker dragging the team down from the back end? Is it the new coach? Did their best players just have an off-year and then a strong recovery? I don't know exactly what it was, but seeing a turnaround like this without a major overhaul gives me some hope for this year's version of the Oilers.