Khabi To Do The Jailhouse Rock

Share All sharing options for: Khabi To Do The Jailhouse Rock

Folks, it's been  nearly 18 months since the event and finally there looks to be a resolution of the case of Edmonton Oilers' disgraced goaltender Nikolai Khabibulin who was arrested for speeding in his black Ferrari, and subsequently charged with an extreme DUI. I still stand by my claim that I would have helped Khabibulin get home safe that night. I was in Glendale for the Oilers game that night, I was even staying in Scottsdale Arizona. Police pulled Khabibulin over for driving 70 mph in a 45 zone. Khabibulin was recovering from back surgery and is on record for saying that he had only had a single glass of wine that night. His blood alcohol reading was 0.164, twice the legal limit. Thirdly, Khabibulin was also charged with failing to produce insurance. Super awesome.

When the news first broke, many wondered if Khabi would end up in "tent city" a jail where inmates where pink jumpers, live in tents and work quite hard. Even now, we are not sure. All reports say that Khabibulin looks to serve his 15 days of jail time in an Arizona jail, and 15 days of house arrest, wearing an ankle bracelet. Combined, that totals the original 30 day sentence which was handed down last summer. Tuesday, Khabibulin paid his $1,507.60 fine and is awaiting the judge's approval to attend his alcohol program.

Many questions still remain around Khabibulin's ability to cross the border and even play in the NHL; the league still has the opportunity to hand out a punishment of their own to Khabibulin and the Oilers do have to play a number of games in the USA.

That Khabibulin has decided to stop pursuing his appeal and attempt to put this whole mess behind him his a good thing. Sadly, fans don't forget. At this point, Oilers' fans have soured on Khabibulin for his injuries, his low save percentage and dragging the team through the mud when it was in an all time low. The team was finishing dead last for the first time ever, that was not exactly the best time for a player to be charged with anything.

If Khabibulin can serve his jail time starting in the next few days, that should not interfere with the Oilers' training camp and the training Khabibulin needs to do in preparation for camp. During his house arrest, Khabibulin will be allowed to leave the house for up to 12 hours a day, for hockey related issue or training.

Coach Tom Renney was on Oilers Lunch again this week and interestingly enough, on Tuesday the day we received more Khabi news. Renney told Stauffer that Khabibulin will be the number one goalie going into camp, but it will be up to him to earn and keep that spot for the season. 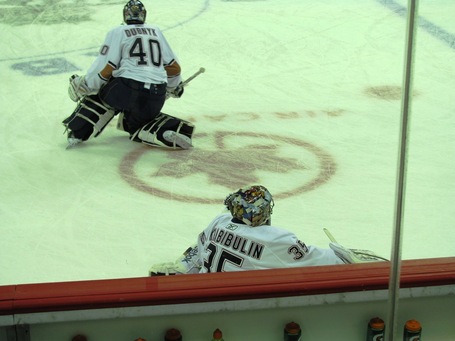 Ideally, Khabibulin will serve his jail time and house arrest without any more fanfare or public scrutiny. Ideally, Khabibulin will come to camp in the shape of his life and reclaim his starting role with the team, the role that he is on salary for for another two seasons. Will those things happen? Likely, the first part yes, the second part no. Well, not until everyone is given the opportunity to see Khabibulin at an NHL level, through pre-season and after the first few cuts.

It would be impossible for Khabibulin not to know that the fans have soured, that some members of his team seemingly doubt his abilities. If he listened to the interview with Renney he would know that he may be on a short leash with the team's coaching staff. Khabi must be aware of all of this, and it just might get to him. On the other hand, that could be what he needs to push himself  on.

At the time that Khabibulin was signed, some Oilers fans thought it was an improvement, some a lateral move, and others a step in the wrong direction. At that time, many fans were ready to see Dwayne Roloson walk away, felt that signing him to a multi year deal would be a mistake. How many of those fans have changed their tune. I'm going to guess pretty much all of them.

Roloson was able to pull up his socks and stand out in the NHL this past season, lighting up the playoffs and wowing hockey fans across the nation. It is not completely out of the realm of possibility that Khabibulin could have a similar year, but sadly it's not the most likely scenario.

In all likelihood, Khabibulin will return to Edmonton and have a good camp, but he will be outshone by at least one other goaltender, hopefully Devan Dubnyk. Likely, Dubnyk will be played in a starting role, and Khabibulin will play 20-30 games if he can remain healthy. The other if, if Khabibulin doesn't suffer border crossing issues.

What Khabibulin needs to do is focus on his training, keep out of trouble and keep in mind that if he wants to end his NHL career on a high note, it is up to him. If Khabibulin's next two years are like his last two years, he will have an extremely difficult time finding another NHL contract. There is also a chance that if Khabibulin plays another atrocious year, that he could be bought out, even if that means he would be bought out at full price because he signed a contract after 35. The Oilers look to have a tougher time with the 50 contract limit rather than the salary cap for the short term.

So rock on Khabi, keep your nose clean and try to put your past behind you. This could be your very last chance in NHL training camp.