Tales From the Road: Anaheim

Share All sharing options for: Tales From the Road: Anaheim

Like many of you, I have had my share of favourite Oilers. For me, my last road trip with my Lubomir Visnovsky jersey was one that included a stop in Ahaheim Califronia. How odd that two short weeks later, Visnovsky would no longer be an Edmonton Oiler, but an Anaheim Duck. How very strange also, that just over a year later as I look back at photos from the game, I see that three other Oilers are now Ducks; Jean-Francois Jacques, Jeff Deslauriers and Andrew Cogliano.

Like so many games I have paid good, hard earned money to see (not unlike many of you reading this now) only to see a horrendous loss. They were not all painful 7-1 losses to the Carolina Hurricaines, but when it is the second loss in as many nights, even a 3-2 loss to the Anaheim Ducks stings.

Driving up to the Honda Centre is truly something else. You are across the free-way from Disneyland, supposedly one of the happiest places on earth. You see a large football stadium nearby, and then the Travel Alberta logo. Marketing to a vacation destination doesn't seem like something I would think of, but who knows, maybe it's working after all.

The Anaheim Ducks were in their 16th season last year, and no longer owned and operated by the Disney Corporation. The jerseys no longer look cartoonish, even if they are not the best jerseys in the league.

The parking is plentiful in Anaheim, and it needs to be. This is another arena that is around a number of restaurants and other attractions, but there appeared to be little in the ways of public transit options. This could very well be because we were tourists, but Los Angeles and area is quite spread out and they do love their cars in this section of the world. I can't help but wonder if hockey might be even bigger in Anaheim if the arena was even easier to get to, maybe not so close to Disneyland and it's crowds. 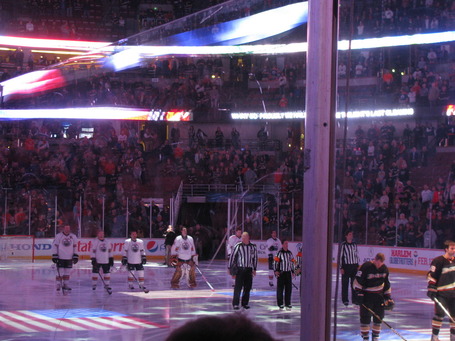 Besides the movie Mighty Ducks, and the 2007 Stanley Cup victory, I must admit there was little I knew about hockey in Anaheim. I wasn't sure whether or not to expect a full house, fans that were hockey crazed, or if the vendors would know how to do arena food justice. I was extremely pleased to see that they do in fact seem to love their hockey in Anaheim. It was a packed house in the Honda Centre, and this was on a Wednesday.

Some of the people sitting next to us were from Shawn Horcoff's real home town of Castlegar BC. In fact the family had had the pleasure of taking in the morning skate and visiting with several Oilers at Horcoff's invitation while on a vacation in Disneyland. The children eagerly displayed their signed shirts and jerseys and couldn't stop smiling as they described their happiness at meeting some "real live hockey players." 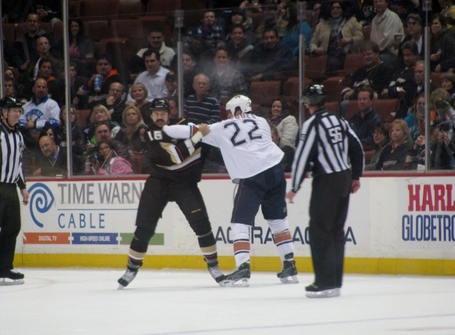 George Parros and Jean-Francois Jacques dropped gloves in the first period. Jacques suffered a gash to his head and did not return until the third period. I think that it was the power of the moustache that spurred Parros on to victory.

This game saw the Oilers score two short handed goals, just one short of a team record in the second period. Alas, this game was still another Oilers loss, one that added to the team's first dead last finish and first overall draft selection. 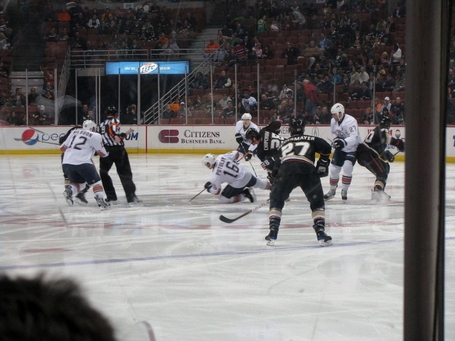 There are several things to see and do in Orange County California. You of course have your amusement parks; Legoland, Disneyland, Universal Studios and the list goes on. What is also interesting is that the Anaheim Ducks have partnered with the Anaheim Science Center to make a "Science of Hockey" interactive display. Through this display the Ducks are working in much the same way that the Oklahoma City Barons have lately, trying to get new hockey fans through the community youth. 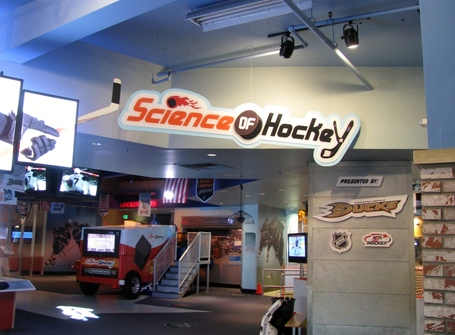 The fans in Anaheim were engaged in the game, and the Oilers' fans in the stands were well aware of the fall for hall. The only thing that seemed out of place or slightly odd was the Anaheim Ducks mascot, Wild Wing. I'm sorry, but he looks like a cross between Friday the 13th and Donald Duck. That's something else in Anaheim that I would not have planned that way. 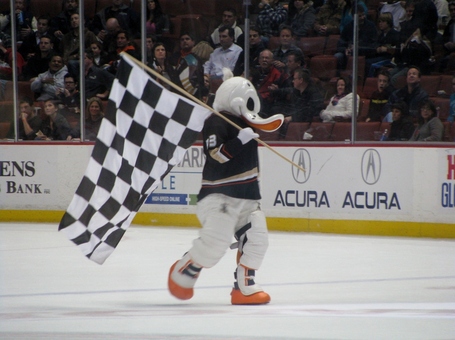 I did love to see the Ducks that were a part of the three stars selection for the game toss sticks out into the crowd for their adoring fans. Don't get me wrong, hats are great and safe to throw into the crowd, but a stick would be a very special keep sake from any game.

If you find yourself on a family vacation during the hockey season in Anaheim, I highly recommend treating yourself to a hockey game if the opportunity presents itself. Even if the Oilers are not in town, there will likely be some ex-Oilers on the ice.