The Edmonton Oilers were not done moving players before the beginning of this week, and I'm not sure that they are now, even following the trade of speedy winger Andrew Cogliano for a 2013 second round draft pick. There are several concerns for some fans about this trade, but maybe most bizarre is the fact that it was the Oilers who requested a 2013 draft pick and not a 2012 pick.

All had been quiet on the new arena front for so long that many were starting to think that things were moving along smoothly; no news is good news. News did start breaking out on Thursday that Northlands is looking for money for new seats at Rexall Place. This expenditure of money is of course at a poor time considering the current negotiations for the downtown arena. This is not necessarily an either or situation, but the pro new arena crowd would rather not see any sort of money sent to Rexall Place for fear that it might re-ignite renovation talk. The $770,000 requested by Northlands would only replace the lower bowl seats, and not do anything to add additional seats, solve roof leaks, add luxury boxes, parking or it's location within the city.

The Ryan Smyth trade may be resolved shortly reports Helene Elliot of the Los Angeles Times. There has still been plenty of comments from Los Angeles Kings' GM Dean Lombardi, and very little from Oilers' GM Steve Tambellini. On Bob Stauffer's Oilers Lunch on July 12th, in the second hour and about midway through of the show it was discussed with Rich Hammond that Lombardi likely received a punishment (fine) behind closed doors because commissioner Gary Bettman despises having comments like this from one GM towards another made public.

The Oilers have signed Ryan O`Marra and Taylor Chorney to one year contracts on Friday. This keeps the Oilers at 49 contracts.

A few Oilers have been in Edmonton lately. Jason Strudwick is a main organizer for he Fairways Fore Hope tournament. Teammates Theo Peckham and Jordan Eberle participated in the tournament to raise funds and interact with fans.

There are a few players that have made Edmonton their home all year round. They tend to get involved in community events and train with each other. Theo Peckham was tweeting his day's events on Thursday. Peckham said he needed to get out and work on his dangles to which Oilers' prospect Tyler Bunz suggested the two work together. As there was no rebuttal or bet, I can only assume that Peckham is still not sure of all of the ins, outs and workings of twitter. It should be funny once he realises the full potential.

Speaking of twitter, many hockey fans just learned that Tyler Pitlick had to undergo surgery this week. Don't worry, it wasn't for his ankle injury. No, Pitlick had his wisdom teeth removed. This should not prevent him from attending training camp early this fall.

It's another day that ends in "y" so there are more stories circulating surrounding the Oilers trading Ales Hemsky. This time of course the rumoured destination is Columbus Ohio and the Blue Jackets. The Oilers media and GM Tambellini has been making a point of mentioning how excited Hemsky is to be playing with the Oilers this coming season. They also can't continue to trade away all of their NHL players for prospects. My bet is that hemsky doesn't move.

There has been a small leak on what the new realignment of the NHL may look like, and it's hard to say at this point how well it would work out. Nothing is said with any certainty yet as it is still unsure what will happen with and to the Phoenix Coyotes. There will still be a lot of discussion as to how to best organize the teams so as to gain the most benefit from fan interactions and enjoyment of the game. Fans love rivalries, rivalries sell tickets and make you rush home to watch games. The NHL will be smart to keep this in mind in any decision they make.

Former Oilers' tough guy Steve MacIntyre has signed with the Pittsburgh Penguins. The Oilers' home opener will be against the Penguins, it will be interesting to see if MacIntyre is in the line-up and if he fights any of the Oilers new tough guys.

Oklahoma City Barons defenseman Bryan Helmer received the President's Award from the AHL this past week. This past season, Helmer not only was the leagues top scoring defenseman, but also because the 7th player in AHL history to play 1,000 games. Congratulations to Helmer!

The Oklahoma City Barons schedule has been announced, if you were planning on attending some games, either through a trip, or because you live there, the 76 game long season will surely hold some excitement for hockey fans.

This is well after the draft, and it is my fault that I didn't post this earlier but I have a friend who is an aspiring sports cartoonist and I wanted to post this for him. This is from Jonathan Turingan and his take on how the new Canucks prospect will fit into the system: 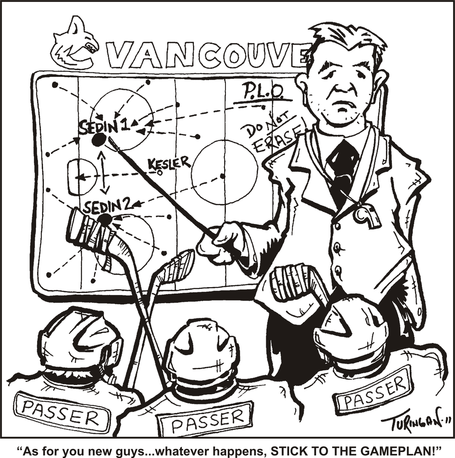 DO YOU SEE WHAT I SEE: EDITION XIV - Oilers Nation Gregor

Is there any silver lining with Khabibulin? - Cult of Hockey Staples

The westernization of the Edmonton Oilers - Cult of Hockey McCurdy

Souray on Edmonton: "It guess it’s just not a place that’s attractive to go…" - Cult of Hockey Staples