Share All sharing options for: The Oklahoma City Barons - Scoring by Game State

The Oklahoma City Barons have seen a lot of turnover this summer. Each member of the team's top line - Colin McDonald, Alexandre Giroux, and Brad Moran - has moved on, as has first-half superstar Liam Reddox. Linus Omark has probably seen the last of the AHL, and last year's captain, Ben Ondrus doesn't look to be on his way back. On the back-end, just four defenders played in all six of the Barons' playoff games - Bryan Helmer, Jake Taylor, Jeff Petry, and Richard Petiot - and three of them are probably gone for good. The Oilers have signed plenty of players to replace these guys (although they didn't get anyone with the AHL pedigree of Giroux or even Moran), but what exactly needs replacing? After the jump, I'll take a look at who was doing the scoring on the PP, on the PK, and at EV for the Barons in 2010-11.

First off, let's take a look at who was getting the job done at even strength, since that's where most of the game is played. The forwards will be in blue, the defenders in orange (regular season results only): 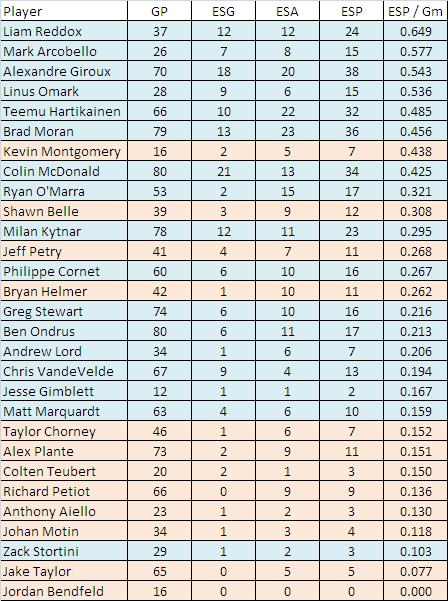 Next up, let's take a look at the power play: 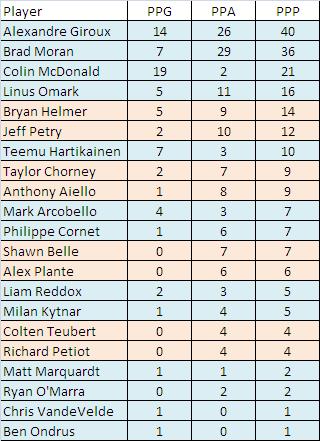 Finally, a quick look at the SH totals: 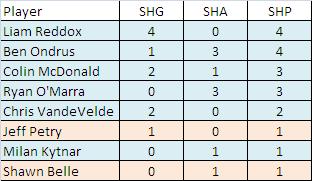