Share All sharing options for: 2008 Draft - Forwards and NHL Equivalencies

After a short break over the weekend, I've put together the last NHLE article in this particular series with a look at how players from the 2008 draft have progressed. As usual, I'll be using the equivalencies developed by Gabriel Desjardins to give us some idea of where players stand in relation to one another when it comes to their offensive development. The Oilers have a couple of good prospects from this draft, but one really stands out. Or at least he would if it wasn't for the at-this-point-laughable inclusion of Steven Stamkos as a "prospect" - the distance between Stamkos and the rest of this draft class is completely bonkers.

Before I go ahead and put up the chart, a bit more explanation is needed. Not all of the players drafted in 2008 were actually the same age; in fact, several players had already passed through the draft at least once (and sometimes twice). All of these older players are included in the chart but are marked in yellow. Other players were first eligible in 2007 or 2008, but weren't actually drafted until 2009 or 2010. I've also included these players in the chart with "N/A" written in the "Draft Number" column, but if 2008 was their first year of eligibility, the yellow highlighting disappears. Further, the "Draft Number" column is not the player's actual draft position but the player's position among forwards. So, for example, Jordan Eberle was taken 22nd overall in 2008, but he was the 11th forward to be drafted, so his "Draft Number" in the chart is "11". The "Team" column is the team that drafted the player in 2008, not the team that has that player's rights today (Danick Paquette, for example, is still listed under Atlanta even though Atlanta doesn't exist anymore, and the player was just dumped on Washington). In addition, these numbers may be slightly different than the NHLE numbers you may have seen elsewhere for these players. That's because I include both regular season and playoff games in the results, which I think probably gives a better estimate of each player's real level of ability. Most of these teams aren't playing a balanced schedule anyway, so it seems to me that including the larger sample of games is the way to go. Finally, the "Rank" column is organized by NHLE. I broke the chart into five portions so that it would be easier to read, but it's still quite small.  You can click on a segment if you want to enlarge it. 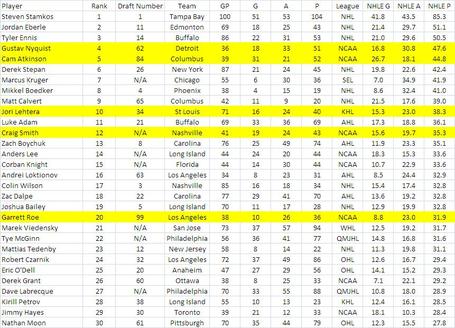 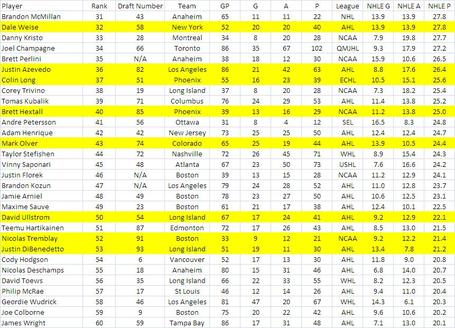 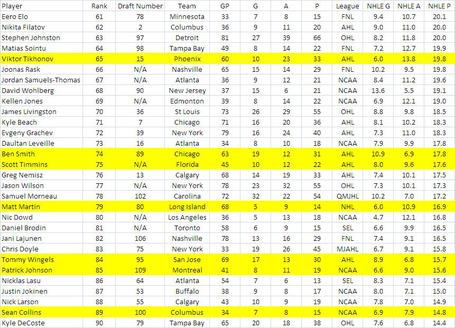 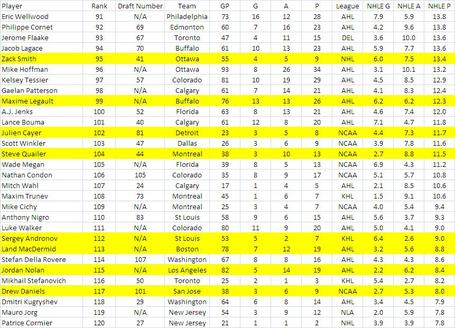 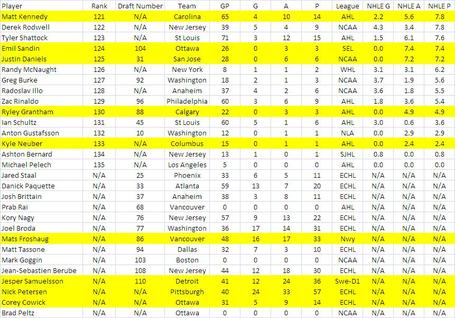 This is always one of my favorite years to look at because the players are finally running out of places to hide. Sure, there are still a few prospects hiding out in the CHL or the NCAA, but for the most part, these guys are playing pro hockey, and it shows in their results. A year ago, there were thirty-two players from this draft class who had an NHL equivalency of 30.0 NHL points per 82 games or better. Now, there are just twenty-two. So what's gone wrong? Well, it seems to me that while the equivalency is very good at projecting the average performance of players who go directly from the CHL or NCAA to the NHL, that's not really the majority of players, and those that don't make it all the way there tend to struggle a lot more than the equivalency numbers imply.

There were thirty-five players from the 2008 draft who played mostly in the CHL or NCAA in 2009-10 and then mostly in the AHL in 2010-11. If we use their NHL equivalancies from 2009-10 to create base-line expectations for 2010-11, which seems fair since these are young players that we expect to improve, thirty-four of these players fail to meet expectations: 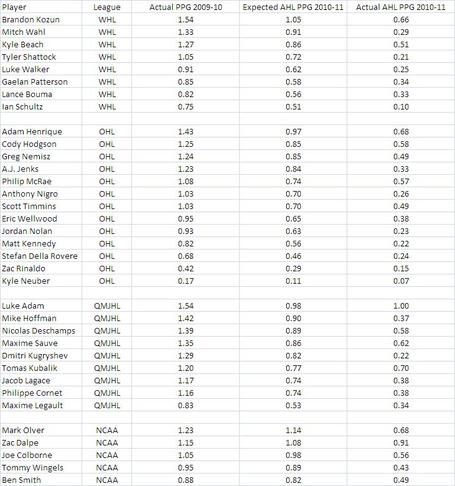 That's a whole lot worse, folks! By tracking just those players who reach the NHL (i.e. the winners), it would seem that the equivalency numbers are providing a much rosier picture than is warranted for the (majority of) prospects who don't get to the NHL directly from these leagues. I'd want to do a more in depth study than this before tinkering with the numbers, but it seems to me that some tinkering might need to happen. The Philippe Cornet experience of point per game junior followed by a butt-kicking in the AHL is just too common.

On a more positive note, a lot of these players tend to get better as their AHL career progresses (hopefully toward the NHL). Guys like Andrei Loktionov and Zach Boychuk are near the top of the list this time after being in the middle of the pack last summer. I think a lot of that has to do with the fact that those two just finished their second AHL season, while many of the other prospects just finished their first. It takes guys time to adjust to the pro game, but a lot of these guys will get there eventually. This is particularly relevant for Oiler fans who are looking forward to players like Tyler Pitlick, Curtis Hamilton, and Ryan Martindale potentially turning pro a year before their peers. Don't be surprised to see those guys fall down the chart next year, only to have a resurgence the year after.

Of course, the guys who went straight to the NHL did very well for themselves. Jordan Eberle, Derek Stepan and Matt Calvert were three darn good rookies last season. I had been skeptical of Eberle before this season, but seeing him jump straight to the NHL and have success has really put my mind at ease. He's already a good player, folks, and looking over the rest of this draft class, that's something to be excited about.