Dillon Simpson: One Step Closer to His Dream

Share All sharing options for: Dillon Simpson: One Step Closer to His Dream

On Saturday June 25th in St. Paul Minnesota there were many proud hockey parents in the crowds and stands, but also in the media booths and rooms, even at the team tables on the draft floor. You had to think that this day was especially difficult for them, not being able to sit with their children and congratulate them  when their name was called, or pat them on the shoulder as they waited for their names to be called. You have to think that even though prospects such as Keegan Lowe, David Musil and Dillon Simpson all were fairly certain they would be drafted it had to be difficult to be sitting in the stands and wondering not only if it would happen, but when.

When the Oilers reached their first pick of the fourth round, all of the anxiety must have fallen off of young Dillon Simpson's shoulders. His father, Craig Simpson is well known for his work on Hockey Night in Canada and his aunt Christine Simpson works as a hockey reporter for Roger's Sportsnet. Dillon is another hockey player who has been groomed for public speaking and a day just like today one would think.

As Simpson walked into the interview room, his deep set dimples were on full display, a full smile on his face, and a twinkle in his dark eyes. Dillon Simpson walked casually and appeared to be confident and calm despite the commotion surrounding him, all of the other draft picks in the room going through the same thing he was about to. The flashing lights and microphones in his face didn't seem to bother the young defenseman, he was ready.

How did Dillon feel, being drafted by the Edmonton Oilers, a team that his father had played for? The Oilers were "The team I grew up loving, the team I grew up around." But it went further than that for Simpson, "Deep down, I really wanted to be an Oiler. I'm glad I got the opportunity to go to Edmonton." That was the first time I think that I had heard not only what a player must feel was expected of him, but also what I believed to be an honest and truthful answer. I think for at least that moment Simpson told us what he was really thinking.

Simpson's Dad was not able to sit with him in the stands, was there any particular words of advice? "Going into the draft, he just wanted me to relax and enjoy it. He was really supportive and he was really happy that I was drafted."  Much easier said than done, especially when Simpson was a mid draft pick. Somehow, father and son were able to keep their composure through it all.

So who would be happier with Dillon being drafted, let alone by the Oilers? "I think definitely me. I can finally exhale and it's a great feeling. Deep down I always wanted the Oilers and it's perfect." Is perfect really the right word for the situation, his dad was after all an Oiler, what about that added pressure? "I know maybe there will be sceptics, with my dad being there. But my dad's not part of the Oilers organization now so I don't think that there will be any problems." There will still be pressure, as with any player getting drafter into the NHL "I enjoy the pressure. It's part of the things you have to battle and overcome. I  think that it will be OK since he's sort of distanced himself from the organization these days."

If it wasn't the Oilers, there are of course other teams that have a connection to his father, was Simpson maybe expecting Glen Sather and the Rangers to take him? "Ya, I was expecting maybe that too."

Currently, Simpson is enrolled at the University of North Dakota, the same school Chris VandeVelde and Taylor Chorney attended. Through all of the questions we asked of Dillon, I forgot to ask him what he is taking in school. Thankfully I had a second chance at the Oilers development camp when who should I find myself standing next to, but Craig Simpson. Simpson Sr. was only too eager to answer any questions I had concerning Dillon. I mentioned how charismatic and smooth he was with the media, "He gets that from his mother." I found that funny, as Craig Simpson is on national television so many Saturday nights of the year. Craig Simpson said that Dillon is taking business at school and currently has a 4.0 GPA. That's an enormous amount of work and pressure for any student, let alone a student athlete. Dillon Simpson has not yet had to select a particular business major, but has some ideas as to where he would like to go with his educational pursuits. 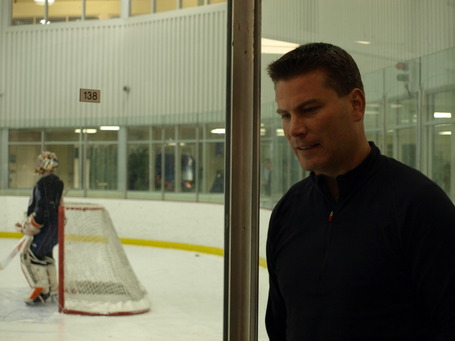 Proud father Craig Simpson, watching his son at the Oilers development camp, reflecting on his time as an Oiler and what it means to watch his son step closer to the NHL. Photo by Lisa McRitchie all rights reserved

Is Dillon looking forward to his next year of school? "Ya, I go back this year and we have a younger squad and I'll play a bigger role. It's an exciting time. Big off-season and it it will be a good season next year." His father Craig only had to do two years of school, does he think that he may take a similar route? "Naw, I think that he was a special case. Second overall is a little different than 92... I'll go as long as it takes" Has playing in the NCAA college system helped with his game? "Ya, I think it helped me grow a lot this year. Going in as a 17 year old kid playing against 24 year old men. It's an eye opener and it pushes you hard."

There will be many out there wanting to compare your game to your father's how would you compare yourself? "Defence to forward is hard but I'm a two way defenseman. I like to chip in on offence as much as I can. Love quarter backing and taking part in power plays and take pride in my own zone. I hate to get scored on. I hate to get beat."

As soon as Dillon Simpson expressed such confidence, I wondered how far it went. Do you see your dad's career as a personal challenge for yourself, any challenge for a better career than he had? "That's a lot to say, but I'm going to go out and do my own thing and hopefully make the team." Then right there, Dillon appeared wiser than his years, and his ambitions seemed reasonable and respectable; make the team, then go from there.

Dillon had friends in the crowd with him "Keegan and I have known each other since we were babies. We've been friends forever pretty much. We've been good buddies ad we've been talking to each other and hanging out a lot at the draft. It was great to see him get drafted and I'm sure he's happy as well. With David Musil, we were good friends when we were growing up and we were younger. We've kind of kept in touch through the years. It's great to see him go to Edmonton as well." Because I knew that Keegan Lowe and Travis Ewanyk were friends and hearing how close Keegan was to Dillon, was there any gentle ribbing from Keegan who was selected before the other two yet? "I'm sure I will I haven't talked to him yet."

Simpson is years away from a spot on the Oilers squad if he wants to finish his degree. After that, who knows if it will be the AHL or the NHL, only time will tell. I think that because Dillon's father is not a part of the Oilers organization and because his father played a different position, that Dillon will have an easier time if he plays for the Oilers, than a player like Keegan Lowe would have. In the meantime, hopefully Dillon is able to maintain his grades and enjoy his hockey development.

If you would like to have a look at a prospect profile, our New Jersey Devils SB Nation brothers have put together a great read before the draft. Dillon Simpson's story is far from over, we'll be sure to keep tabs on this young player.