One positive with Thornton on the ice was Peverley playing on the third line rather than the fourth.  Kelly and Ryder were both very good.  If I were Julien, I'd think long and hard about moving Peverley into Horton's spot in the lineup and putting Seguin back on the third line with Kelley and Ryder.  Peverley played the toughs in Atlanta and can handle the minutes - Seguin will one day.

Even though the Versus crew was convinced Tyler Seguin would join Krejci and Lucic, Claude Julien stuck with his closest advisers here at The Copper & Blue and it paid off.  Not only was Peverley a nice fit on that line, his presence meant two good faceoff men at the top.

There are some thing to worry about in here.  Thornton's physical presence may be a boon to the team, but at the same time, he's -5 in about 15 minutes of even strength play.  He's a drain on that fourth line when it comes to actual hockey.

Ference and Boychuk continue to get the good matchups away from the Sedins and continue to make the most of that time.

Michael Ryder is +6 in chance differential over the last three games.

The Sedins finally get back on track and generate a bunch of chances and win the battle convincingly, but Kesler continues to struggle.  The "Kevin Bieksa for the Conn Smythe" campaign by the folks on HNIC has disappeared, as has his effectiveness since losing Dan Hamhuis as his playing partner.  He'll still get a large paycheck from someone, but a Hamhuis/Bieksa WOWY is in order to figure out what Bieksa is really worth. 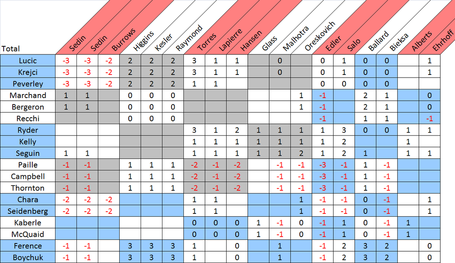 There is more to worry about for Claude Julien and the chart shows the reason.  Without last change in Vancouver, he's going to be hard-pressed to keep Bergeron on the ice against the Sedins.  Just like the Tampa series, the Krejci line is losing the battle against the Canucks top line.  Kelly might have the ability to play against the Sedins, but Ryder and Seguin are not the right guys for that matchup.

Keith Ballard should be employed as a deterrent on all teams.  "Don't hit people in the head, because your replacement is Keith Ballard and your team will lose."