17 total even strength chances and 16 total special teams chances makes for a completely unpredictable game and the result was an 8-1 mauling.

Don Cherry lauds Shawn Thornton, of course, as the reason for the win.  Unfortunately, the only thing Thornton did was get ejected.  One positive with Thornton on the ice was Peverley playing on the third line rather than the fourth.  Kelly and Ryder were both very good.  If I were Julien, I'd think long and hard about moving Peverley into Horton's spot in the lineup and putting Seguin back on the third line with Kelley and Ryder.  Peverley played the toughs in Atlanta and can handle the minutes - Seguin will one day.

Sami Salo was +1 in this game and it wasn't a fluke.  He was +5 in scoring chances and the only dude to win his battle convincingly. 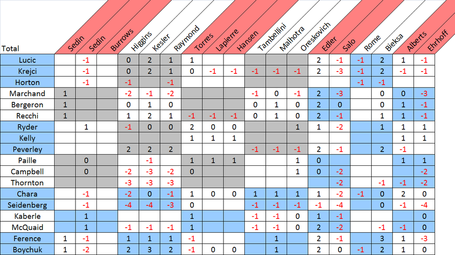