It's not often a fan base should be excited about a forward with a scoring chance percentage of .451, but in Magnus Paajarvi's case, there is so much to be excited about.  By the numbers and to the eye, Paajarvi started slowly as he adjusted to the NHL in his rookie season, but sometime around his 20th game, he started to understand this whole NHL hockey thing. 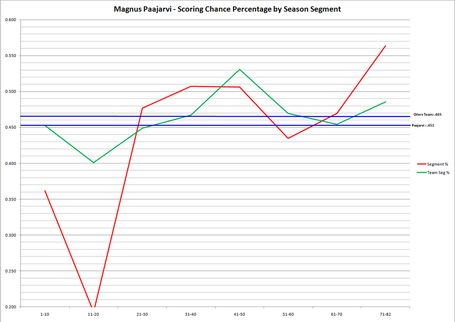 Rather than talking about regression, we can talk about progression.  Paajarvi's first two segments were brutal, sub-AHL-type segments.  A look at his totals with his most common linemates during those 20 games shows just how tough Paajarvi's transition was on him and his linemates:

But starting with the 3rd segment of the season, games 21-30, Paajarvi's results changed significantly.  In his last six segments, he was 50% or above three times.  He was above the team average four times.  The graph shows the beautiful contrast in his results.  In fact, from game 21 through the final game of the season, Paajarvi's scoring chance totals were as follows:  229 CF - 232 CA or .497 chance percentage.  He was nearly an even player in the last six segments of the season.

Paajarvi's best extensive work came with Linus Omark at .498 and that includes time spent with Sam Gagner (51 CF - 65 CA).  Find the two Swedes a center who can work with them and the Oilers have a very dangerous line.