My feet are sore, a prestigious member of the MSM very nearly fell on me from standing on a chair, I'm dehydrated, tired, and have been eating and making horrible food choices, it must be a draft weekend right?

The first round went extremely quickly.. There were trades and surprises, some happy hockey fans, players and their families in the stands and the fun doesn't stop for 5 more rounds. True, the fifth round guys likely will not be in the building but I can just picture them getting the phone call at home that they have been drafted. In this day and age though, it's possibly more likely that they will be tweeted by the team or their friends and family,

The Oilers have the first selection of the day once again. They selected their centreman first, then their tall Swedish defenseman with the 19th pick. For the 31st pick it's hard to say who exactly they will pick. When I asked Steve Tambellini last night about his plan for the rest of the rounds, and if he was still looking for balance he said "Overall as a draft philosophy you want to feel needs of what you can. You do, but we'll have to see if that can be accomplished. Like I said I think that we're off to a great start with the first day." I have to agree with the man.

For your reading pleasure you might want to re-familiarize yourself with some of the players in this years' draft by checking out this years' Copper & Blue draft primer.

8:10 An awful lot of people standing around the Oilers table. My mind of course goes to the 31st pick and Ryan Smyth. Not that the two are related, but those may be the first business of the day.

8:45 The media have been asked to leave the draft floor and we are getting ready to begin. I am hearing all of the Gilbert Brule health concern issues and talk and am just as bummed as you are. Hopefully all is not lost. If the Kings were going to buy out Brule, that means they aren't looking for much in return for Smyth. Let's try not panic just yet.

8:56 Doing the roll call as I type. Shockingly all teams so far have been here. 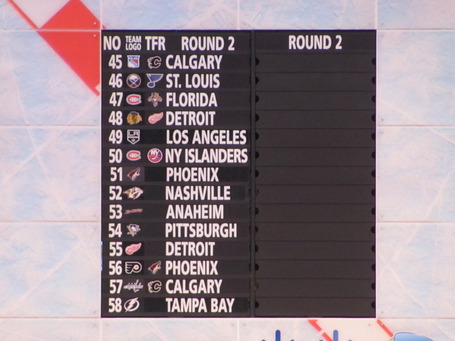 9:31 GREAT interview with David Musil, I will be typing that up soon. I was able to get two or three questions in from the scrum. He is extremely excited play for the Oilers.

9:44 Wow, no one here today likes Vancouver. I think that they got the extra boos because Bettman isn't on stage hosting this today.

9:48 the Wild trade two later picks for the Vancouver Canuck's second round pick. The player they selected Mario Lucia is the Universota's hockey coach's child. The crowd went wild!

9:51 All set up and ready to transcribe audio, but the Oilers are selecting

10:26 WOW, Keegan to the Hurricaines, I got some good questions in with him. Hopefully if things settle down I can start typing things up! Our new Finnish goaltender learned how to answer a few questions, and nothing else. When I tried to ask about army service I could not get an answer. I asked if he had served, he said yes. I asked if he had any more time to serve, he said yes. Asked how much more army time he has left, he said yes. So, hopefully someone with a translator will have better luck.

Excited to see two Oil Kings selected back to back and in the third round. I think that that speaks well of the club and the system. Travis Ewanyk was not in the building. We waited and waited for nothing, but that's not so bad.

10:56 Holy cow folks, I am way behind. I got some questions in with Dylan Simpson but need to type them up. Most of the media are not coming down to the interview room anymore.

11:08 Hearing Tanguay is done, so it looks better for Smyth not going to the Flames.

11:44 its the 6th round and Ben was right, I feel completely overwhelmed. Lots and lots going on and not nearly enough time.

11:51 just had the chance to see what happened to my friend Kale Kessy. Kessy was selected 111th overall in the 4th round by Phoenix. Great for that kid. He shows a lot of poise and I hope he can make it in the NHL eventually.

11:58 The mike situation in here is ridiculous. I have no idea who we just selected. Not a clue.

12:00 Well alrighty then. I thought I heard something about a goaltender. The Oilers have selected in the 7th round, 182nd overall, another Finnish goaltender. This one is named Frans Tuohimaa.

1:16 everyone is leaving and I am trying to figure out what I have and what I can present. This trip was a whirlwind, but a great draft experience. A huge thank you to the people of St. Paul for hosting this event, and hosting it so well. Nathan Eide and Bryan Reynolds were extremely hospitable and a joy to work with.