Last year, I wrote an article on "fishing holes", a phrase I lifted from an article that Kent Wilson wrote a couple years back. Here's what Kent had to say about the concept:

This may be why clubs develop what I call "fishing holes", by which I mean they concentrate their scouting in certain amateur/developmental leagues (for the Flames, it's the WHL/CHL) - they can become familiar with the relative degree and value of the competition and therefore can more capably gauge a prospects level of performance.

During Darryl Sutter's tenure in Calgary, the Flames were an extreme example of this, drafting more players from one league (WHL) than any other club, but most teams in the NHL do have "fishing holes" of their own, i.e. areas where they draft proportionally more players than the rest of the league.  After the jump we'll take a look at the tendencies for all thirty NHL teams.

In the following chart, I've taken all of the players selected in the last five NHL entry drafts (2006-2010) and calculated what percentage of draftees were taken from each league, which will provide a baseline in determining what's "normal".  Here are the percentages for each of the leagues and/or nations (note: this is where the player was playing when drafted, not the player's nationality): 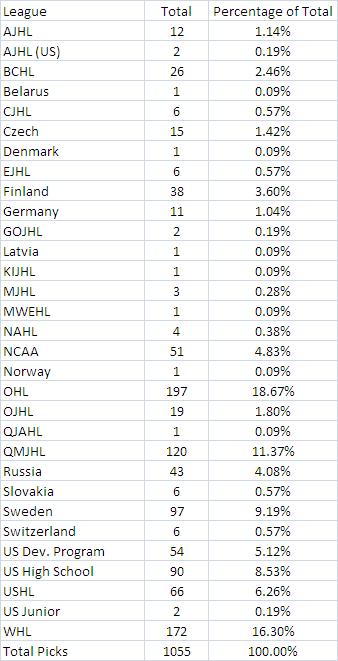 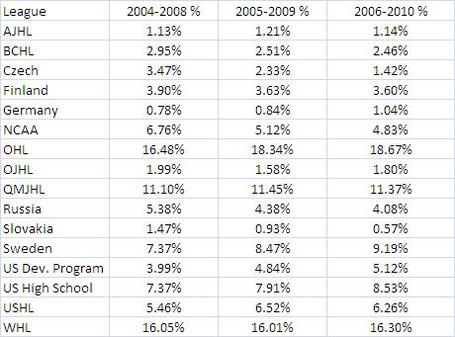 Most of the leagues in Europe are seeing a steep decrease in the number of players being drafted, with Russia, Slovakia, and the Czech Republic hurting the most. Interestingly, even though many of the players who would've been drafted from those countries have moved to the CHL, the CHL hasn't seen a huge increase in draftees, with both the QMJHL and WHL staying relatively flat. Instead, it's been other European countries like Sweden and Germany that have picked up the slack. In the US, there's been a shift away from NCAA players and towards players in high school, and those participating with the development program. 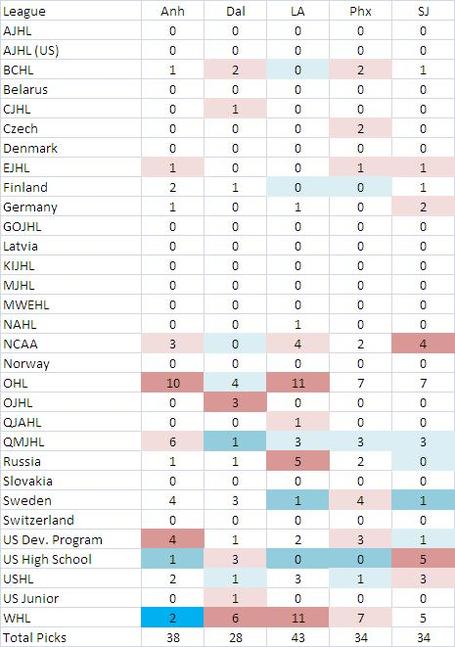 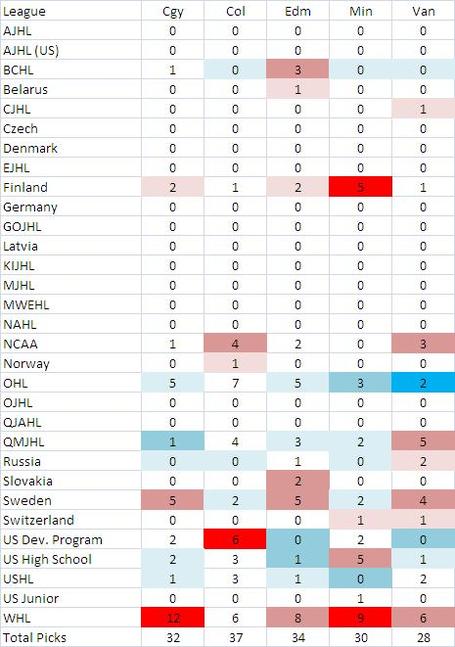 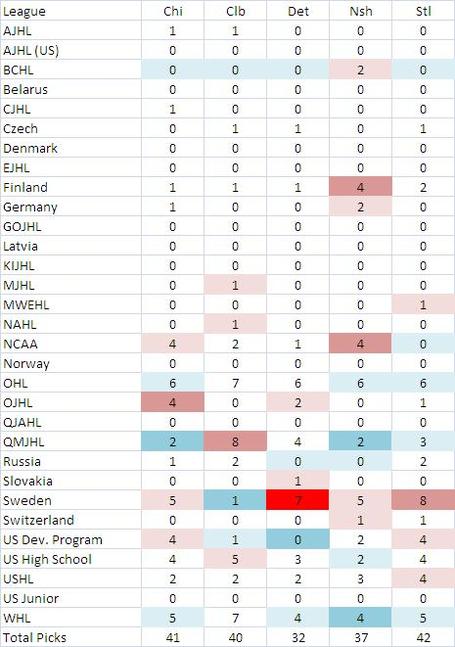 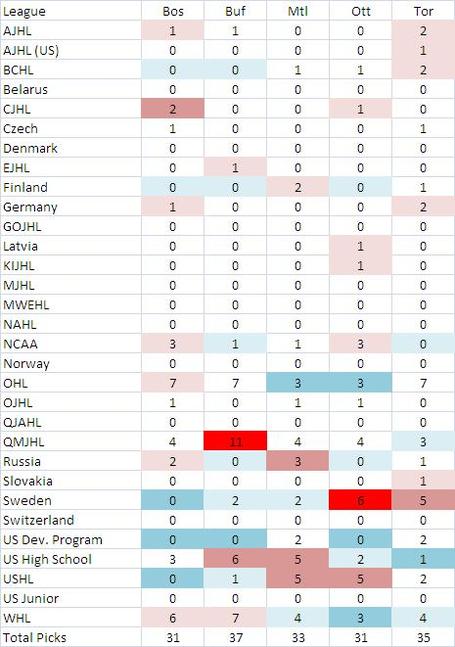 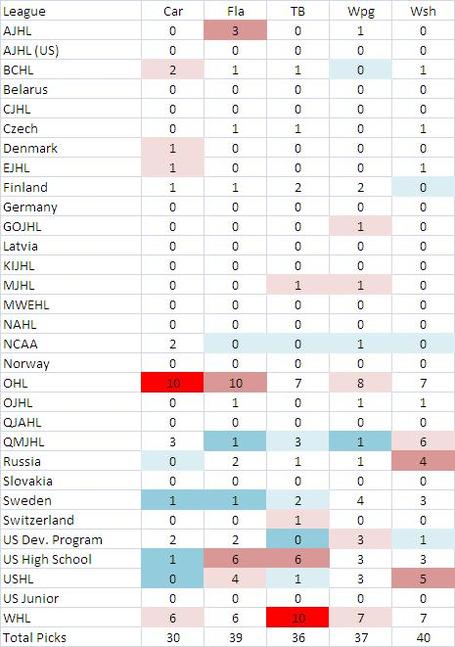 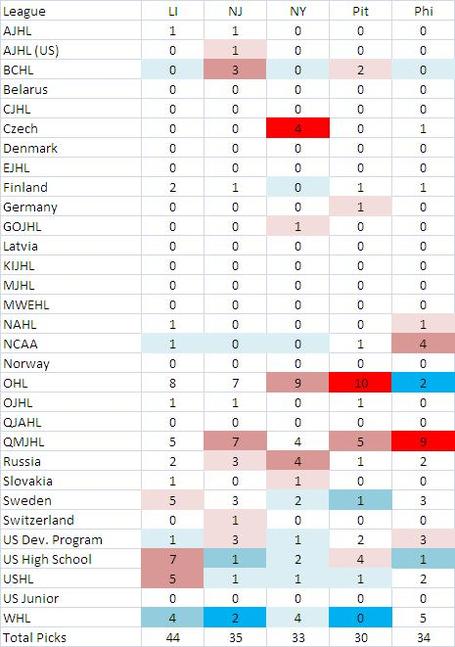 One of the fun ways that this data may help is in looking at prospects leading up to the draft. The Oilers, for instance, have a couple of third round picks, so it makes some sense for us to look more closely at some of the guys in that range from Sweden and the WHL leading up to the draft, and a whole lot less sense to look at guys playing in the United States since the Oilers tend to shy away from those players (I don't think Troy Hesketh has changed their minds). Here's a quick synopsis of each team's favourite and least favourite spots relative to league average: 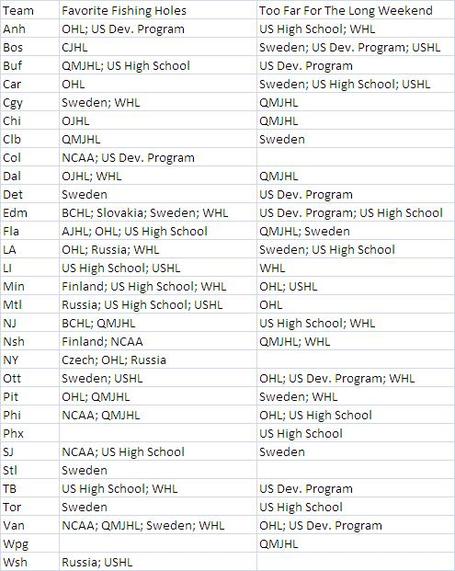 And finally, just a few quick notes on some points I found interesting: