Whether it was karma, injuries, exhaustion, or Boston was the better team, Vancouver was outplayed in this series. The goal differential might have been less lopsided if Luongo could have avoided the road collapses, but Boston did outchance the Canucks, especially on the power play. Claude Julien navigated the match-ups and did his best to keep Johnny Boychuk and Andrew Ference out of trouble and keep Zdeno Chara and Patrice Bergeron on the ice against the Sedins. Despite being outchanced, David Krejci's line was able to outscore (thanks Tim Thomas) and Vancouver found no offense when Chara and Bergeron were able to shut down the Sedins. Boston was able to use superior depth to outlast Vancouver and it can't be ascribed to Vancouver's injuries - the Bruins were missing Marc Savard and Nathan Horton.

*4v4 chances do do not count as even strength time on ice. See here for an explanation.

The Bruins were slightly outchanced at even strength and though my first instinct was to pin that on playing to the score, it's not true. In the third period of Boston's four blowout wins, the Bruins were actually +1 in EV scoring chances. Vancouver was +8 in their three close wins (thanks Tim Thomas!).

More interesting, surprising actually, were the chances numbers on special teams. Vancouver had the top-ranked power play in the NHL during the regular season. Boston was 20th. Vancouver had the third-ranked penalty kill during the regular season, Boston was ranked 16th. Despite the big disparity in rankings, the Bruins whipped the Canucks on special teams. The Bruins had the advantage in every category: 29-12 at 5v4, 4-2 at 5v3 and 4-2 short-handed. They held a 37-16 advantage on special teams.

Chara and Seidenberg played a ton of minutes matched mostly against the Sedin line. They both came out on the short end. Ryder's +6 led the Bruins in raw chances, but Tyler Seguin's low-event +5 was second. Krejci's line was out-chanced overall, but was able to outscore their Canucks opponents.

Seguin's time was carefully managed, and that's obvious in his CA/15 numbers (1.223) which were almost twice as good as the next lowest CA/15 (Ryder's 2.316). The biggest surprise to me is Paille's 3.990 CF/15 which led all Bruins in the series. Johnny Boychuk was even for the series in more carefully managed time. Chara, Bergeron, Recchi and Seidenberg are all at the bottom of the differential list because of their large amount of time spent against the Sedins.

By the chances, the Sedin line was the Canucks best line this series, but the pucks weren't going in. Kesler was the man when it came to generating chances, leading all Canucks with 4.077 CF/15 and his regular linemates Higgins and Raymond were at the top with him. On the other end, Glass and Alberts weren't very good in this series and Tambellini and Oreskovich didn't finish much better than Alberts.

Only six Canucks ended the Finals in the red and Edler won the chances battle rather handly. I have to admit I saw Oreskovich much, much better than the chances show. I thought he was holding his own and even creating at times. 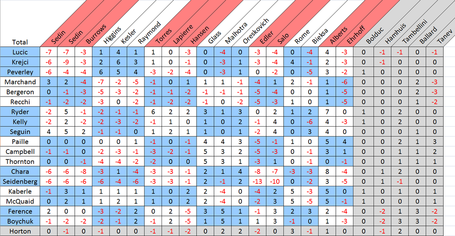 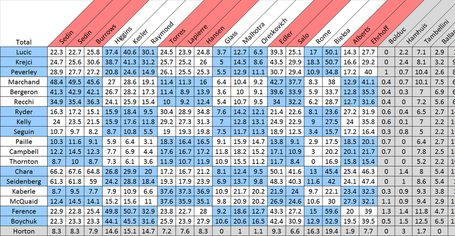 The numbers reinforce the match-ups we saw throughout the series. Chara and Seidenberg got heavy minutes against the Sedins and Ference and Boychuk played against Kesler's line. Note how few minutes Kaberle and McQuaid drew against the Canucks' top two lines. Up front, Bergeron's line matched the Sedins and Krejci matched Kesler. It's also worth noting that the Canucks didn't have a predominant match-up with their defense.

Krejci's line spent the last 14 games getting beat by the opponent's best and yet the Bruins still won both series.