Wake up, you sleepy-head
Rub your eyes, get out of bed
Wake up! The Wicked Witch is dead

She's gone where the goblins go, below
Below, below, yo-ho
Let's open up and sing
And ring the bells out

Ding dong! The merry-oh
Sing it high, sing it low
Let them know the Wicked Witch is dead!

Through two, Boston was up 7-5 and then sat on the three-goal lead and the Canucks generated some chances.  The opening goal by Patrice Bergeron came off of an offensive zone faceoff win.  The Canucks line taking the defensive zone faceoff?  Sedin-Sedin-Burrows, the line with one of the most obscene zonestart percentages in the league.

The sun rises in the east and sets in the west and Johnny Boychuk is the worst Boston defenseman on the road.  Once again, the Krejci line is out-chanced as they have been over the last two series. 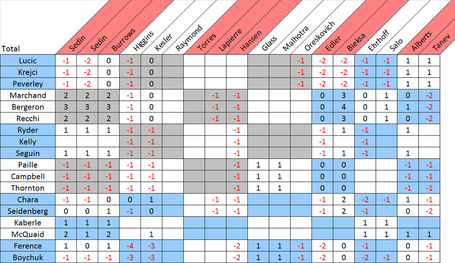