The Moon is blood red as I write this, in a total eclipse, lit only by refraction of all the sunsets and sunrises ringing Earth. It's a deep central eclipse, its totality fully 100 minutes in duration, but with a visibility zone half a world away. Alas, just a few hours too early.

It will be a bright and still very much full moon that will preside over the streets of Vancouver later this evening, as fans congregate to celebrate or mourn as the case may be. (Of course the game itself may well be over before moonrise, given the weird combination of hockey still being played near summer solstice and a 5 o'clock local start time, on a week night no less.)

Never mind those latter facts, they're minor details, let's just pick the ones that fit the narrative (see: ^^ headline ^^). The superstitious folk and true believers with their eyes on the skies (see: ^^ picture ^^) might note that conjunction of events and say "anything can happen"; whereas those of us dispassionate scientific types who have been watching this particular series from afar with the certain knowledge that the phase of the Moon has fuckall to do with it might conclude "anything can happen". Cuz this series has been loony tunes from the get-go.

For sure certain members of both squads have been playing like lunatics at times in a series featuring more bad blood than good hockey. The games in Vancouver were tense but not that exciting, and those in Boston (briefly) exciting but not that tense. When the teams aren't playing Alain Vigneault hockey, they're playing Claude Julien hockey. The body count has been alarmingly high, with lots of dirty play and even more play-acting. Tim Thomas has looked like a Smythe candidate, but his few mistakes have cost him dearly; his counterpart Roberto "Pump My Tires" Luongo has been Vezina-esque at home while on the road he has more resembled Steve Buzinski The Puck Goes Inski.

What's truly astonishing about this series is the goal differential. The Bruins have blitzed the Canucks by an aggregate score of 19-8, yet somehow remain not only tied in the series, and at the serious disadvantage of playing the denouement in the other guys' barn. What makes this especially unusual is that one would expect the team with home ice advantage to be the stronger team and thus more likely to win by bigger scores. Yet here we have Vancouver scraping through by the skin of their teeth, hanging on grimly until finally getting that one chance to win it in the late going, and supposed underdog Boston running away and hiding three times in a row by an average margin of ~5 goals.

Scott had an interesting piece on goal differential in the playoffs a while back, showing that since 1987 no team has won the Grail with a goal differential worse than +13. Vancouver is currently -7 (minus seven). They somehow squeezed by the Chicago Blackhawks in round one despite being outscored by six goals, itself a very strange and (I expect) rare result. But at this moment they could win the biggest series of all while being outscored by double digits.

There's no precedent for this in hockey; best I got is the 1960 World Series. In the Stanley Cup Finals the outscoring team nearly always wins the Cup. I looked at all Stanley Cup Finals since Expansion - I figured anything before that was history so ancient I might have to convince younger readers that there was indeed a time that the Leafs were good.

Of those 42 SCF's the Bruins have been involved in the two most one-sided series from a total standpoint. In 1970 they bombed the still-expansionist St. Louis Blues 20-7 in a four-game blitzkrieg that featured serial butt-kickings at both arenas, and just one tense moment that was punctuated by Bobby Orr's high-flying exclamation point. In 1990, the Bruins were on the other end of five-game drubbing by the Edmonton Oilers, with the post-Gretzky Oilers playing what in some ways was Edmonton's most dominant final series of the five Cups, with a composite score line of 20-8 to prove it.

On average Stanley Cup Finals last 5.4 games, just a hair below the expected 5.5, with the winner outscoring the loser by an aggregate of 18-12. Not surprisingly, however, series that are one-sided on the scoreboard are generally over sooner. Here's the top of the list showing those clubs that outscored by 8 or more goals (ties listed in order of goal ratio): 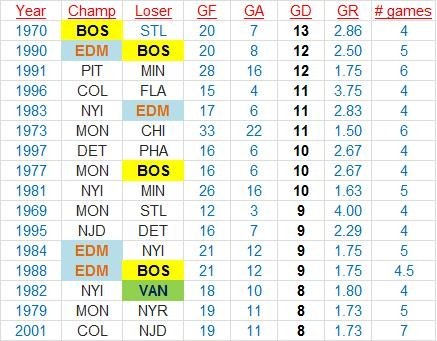 The outscoring team won 100% of those series, in an average series length of just 4.7 games, including 8½ sweeps. (The 1988 SCF is another Boston story that deserves its own post.)  I included all the way down to +8 GD just to find a single example of a "one-sided" 7-game series. It's particularly interesting to note that the 1982 Canucks scored two more goals and allowed one fewer than the 2011 version of the squad has through six games - and they got swept.

If the B's win tonight, even by one, they will be tied with Edmonton for the second largest goal differential since Centennial Year. A multi-goal triumph would put them top of the pops for that entire span.

If however, Vancouver manages to make home ice count one last time, they will surely assume the bottom of that same list. Here are the bottom few clubs: 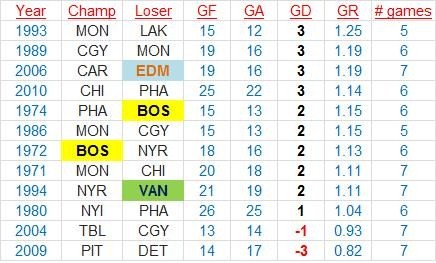 ... with the last three examples falling off the cliff of what had been a pretty smooth distribution curve. Outscoring and winning go hand in hand, apparently.

The Canucks can take heart that the outscored team has twice come out on top in the Parity Era, with the most extreme example being the Pittsburgh Penguins of two short years ago. The Bruins meanwhile can take heart that the road team has taken Game Seven in a homer series, with the most recent example being ... drumroll ... the Pittsburgh Penguins of two short years ago. Strange that both teams might be pointing to the exact same example - one that it's possible to steal a series on the road, the other that it's possible for the worse team to win. Exactlly one of those two things is gonna happen.

I also decided to look at all 15 previous seven game finals right back to 1942 when Toronto Maple Leafs - yes, kids, it's true fact! - came back to beat Detroit. Here's the full list, sorted by goal differential from the champion's perspective: 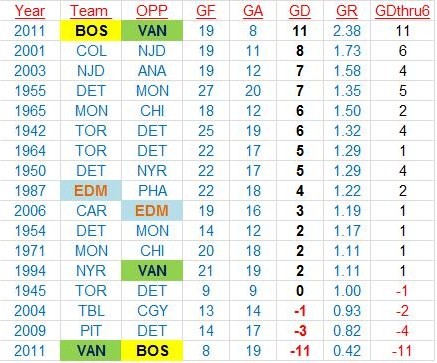 In this case I have added a couple of rows at the top and bottom showing the lay of the land from the current teams' perspective, which demonstrates how truly extreme the 2011 SCF have been. No matter which way the the knife edge cuts, this series will always be an outlier in studies like this.

I also added a column to show what the goal differential was through the respective Games Six. In 12 of 15 cases the team that had outscored through the series went on to win Game Seven. Collectively the fifteen champs outscored by 25 goals through Game Six while winning exactly half the games, before copping Games Seven by a cumulative 28 goals - 44-16, very close to 3-1 on average. We already know that historically Game Seven is typically a fiercely-fought, low-scoring, low-shot affair, and while I expect nothing different tonight, fact is this 2011 series has strayed so far from the form charts that, uhm, anything could happen.

Of course now that we have scientifically studied the effect of cumulative scores on series past, I will cheerfully admit they have about as much to do with the outcome of tonight's game as the phase of the Moon.