Defensemen at the Draft

Share All sharing options for: Defensemen at the Draft

On Sunday, I looked at several of the top forwards available in the upcoming NHL entry draft in order to see which players the Oilers might target with the 19th overall pick. This time, I'll take a look at defensemen, and even though offense tends to be a less important consideration for the defenders, I'll again run their numbers through Gabriel Desjardins' NHL equivalencies. After the jump, we'll look at the top 8 defenders according to the Central Scouting Bureau, International Scouting Services, and The Hockey News.

Since Central Scouting has two different lists, one for North Americans and another for Europeans, I decided to include the top eight North American defensemen and the top three Europeans. The NHLE numbers are expressed in points per game and include the combined regular season and playoff results, which serves to increase our sample size for each player. The ratings expressed are just the rating amongst defensemen, so there's a very good chance that some of these players will be available to the Oilers at 19th overall, and possibly even 31st overall: 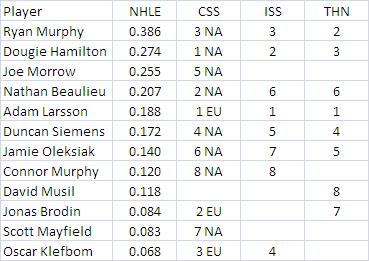 This is a very interesting group of players. Only six players make all three lists, and I think it's fair to say that those six are generally considered sure-fire first rounders and will all probably be gone by the time the Oilers are up to pick 19th overall. If one is still available, I'd be shocked to see the Oilers go in another direction.

As for the rest, they could be gone in the top twenty, but they could also fall well into the second round. The Swedish Elite League is obviously a much more difficult assignment than any of the various North American junior league, a fact that results in significant differences of opinion on Jonas Brodin and Oscar Klefbom. ISS has Klefbom ranked fourth, but THN doesn't have him in their top eight, and ISS reciprocates by not ranking Brodin in their top eight. These are both players who could end up going in the draft's first twenty selections, but they could also last well into the second round.

But the really interesting guy is at the very top of the list. Ryan Murphy is so far out in front that it's ridiculous. How unique is he? Well, I counted up the NHLE for all of the defensemen taken in the first round from 2006 to 2010, and here are the top twenty-five (excluding guys who played in too few games or a league without a proper translation - the big ones missing are Erik Johnson, Oliver Ekman-Larsson, Erik Karlsson, and Kevin Shattenkirk): 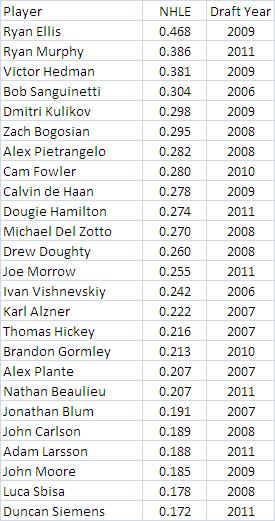 So Murphy's number is right up there with the very best in the last half-decade, alongside Victor Hedman and Ryan Ellis. The kind of offense he's provided is rare indeed; he could be a special player. Dougie Hamilton, meanwhile is in line with many of the other high picks over the last five years. Adam Larsson, meanwhile, doesn't look like he has quite the same offense as Victor Hedman with whom he's often compared. Some will point to his lack of power play time this year compared to last, but that doesn't give me much more confidence, since it's not like he lost that job to a couple of veteran hands (it was apparently Tim Erixon and David Rundblad playing ahead of him), so you'd hope that he could be the best option. And while his 2009-10 season was better, his NHLE was still just 0.234 (including playoffs). It seems to me that offense is (or should be) a very real concern.