Is Even Strength Scoring More Important?

Share All sharing options for: Is Even Strength Scoring More Important?

One of my frustrations in talking about Ryan Nugent-Hopkins with some of his supporters is that they perceive one of the big knocks on him to be a lack of size. So when Nugent-Hopkins showed up to the combine with eight extra pounds of meat on his bones, it was considered something of a coup. Now, maybe I'm different than most folks, but Nugent-Hopkins' size has never been a major concern for me. Size isn't exactly an asset, but it's not a major drawback either. Of course, that's not to say that I haven't found faults!

The two big questions about Nugent-Hopkins for me are his poor relative plus-minus and his lack of even strength scoring compared to the other forwards at the top of his draft class. Both, it seems to me, are significant issues. But Choppystride made a great comment in a thread a couple of days ago that really made me think:

Has there been any analyses done for the entire CHL over a sufficiently long period (say >= 10 years) that shows how a prospect’s draft year EV-vs-PP production affects his performance as an NHLer, or that it even matters at all?

Excellent question! To my knowledge, such a study has not been done, and the belief that EV scoring is a better predictor than overall scoring comes mostly from the sense that a player's ability to perform at even strength is extremely important, and from Tyler's brief look back on the Rob Schremp experience. Now, I won't be going back quite ten years, but after the jump I'll take a stab at the question for forwards drafted in the first round out of the OHL and WHL from 1999 to 2006.

To answer some preliminary questions, I would love to have included the QMJHL in the study, but they don't have the historical data available on their website. If it is made available at a later date, I'll be sure to include it in an update. I've chosen the years 1999 to 2006 because I wanted to make sure that we were talking about reasonably current trends, and going back much further takes us well outside of the thirty-team NHL. Finally, I chose to look at players drafted in the first round because it seems to me that the results may differ significantly between players drafted in the first round and players drafted in some of the later rounds. This gives us a sample of fifty-one players, which isn't huge, but it's not bad either.

In the chart below, I've cheated a little bit and used non-power play points as a proxy for even strength points because it's much easier to collect that data. I've used regular season data only for the same reason. The CHL data always comes from the player's draft year, and the NHL data is always career regular season results. Let's take a look: 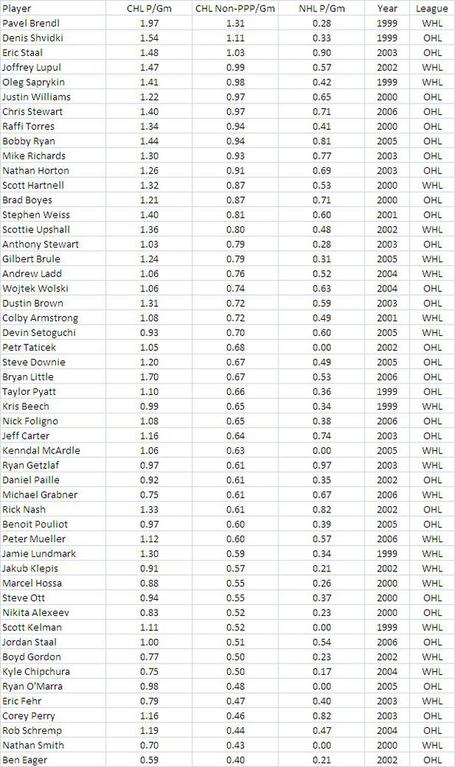 With Pavel Brendl and Denis Shvidki at the very top of the list, we can already see that this isn't going to be perfect. Of course, if we include power play points in the total, the only difference is Bryan Little moving into second spot and forcing Shvidki into third. So yeah... not perfect! So what happens if we chart CHL points in a player's draft year against career NHL points? Well, I've done that once before, and found that there was a mid-to-low positive correlation (Pearson's r = 0.36), but that was with data from the QMJHL included. How does taking out the Quebec league impact the results? 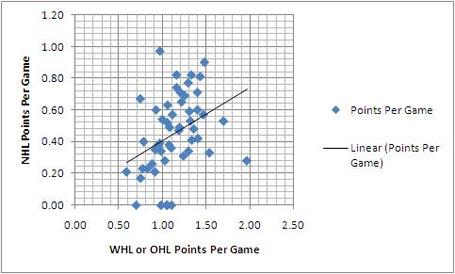 Not much at all. The correlation stays pretty much the same (Pearson's r = 0.36), which isn't too surprising (only eleven QMJHL forwards qualified), but it's still good to know. So does the correlation get stronger if we look at just non-power play points? 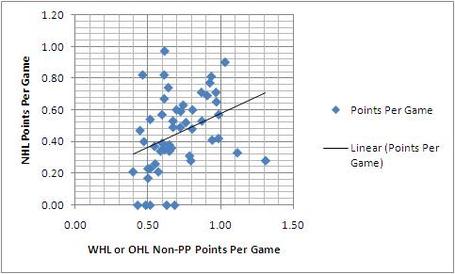 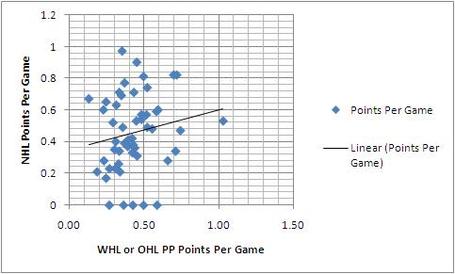