Six shots from the scoring chance area.  That's all the Bruins managed to put on goal in game five.  Game six was a completely different story.  The shot charts show just how badly the Bruins swamped the Canucks' defense and their goaltenders.

Johnny Boychuk comes home and moves back into the plus column.  It's amazing what the last change does for the Boychuk-Ference pairing.  The fourth line played their best game of the playoffs.

Tonight it was all about Kevin Bieksa.  The Canucks rode him like a pack mule and he was on the ice for more than half of the games' total chances. 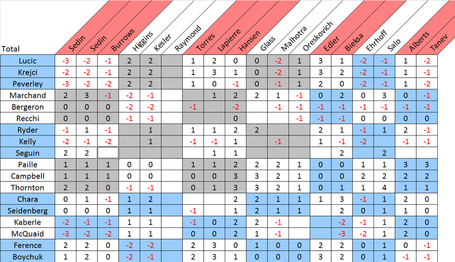