Share All sharing options for: Canucks and Sharks - Series Review

As we get ready for tonight's penultimate (let us pray) match in the Stanley Cup Finals, I thought that I may as well take a look back on the Canucks' previous series against the Sharks. The Canucks won the series in five games, and truth be told, that was probably a pretty fair reflection of the play. I thought that these two teams were much closer, particularly at even strength, but the Canucks really owned the puck in the first two games, and carried a smaller advantage in the last three games to two more wins and a trip to the finals.

I'll start by giving the links to each game in case you want to be reminded of any particular contest when looking at the totals for the series. After that, we'll take a look at how the teams did by period, and how the individual skaters performed. For those who'd like a definition: a scoring chance is defined as a clear play directed toward the opposing net from a dangerous scoring area - loosely defined as the top of the circle in and inside the faceoff dots, though sometimes slightly more generous than that depending on the amount of immediately-preceding puck movement or screens in front of the net.  Blocked shots are generally not included but missed shots are. A player is awarded a scoring chance anytime he is on the ice and someone from either team has a chance to score. He is awarded a "chance for" if someone on his team has a chance to score and a "chance against" if the opposing team has a chance to score.  And, of course, a big thanks to Vic Ferrari for making the whole damn thing possible with his awesome script.

The Sharks actually had more chances in the first period despite being outchanced overall but that had everything to do with a power play that was working really, really well. The Canucks were consistently the better team at even strength, and ultimately, that's what won them the series. We'll take a look at who was getting bombed and who was doing the bombing up next: 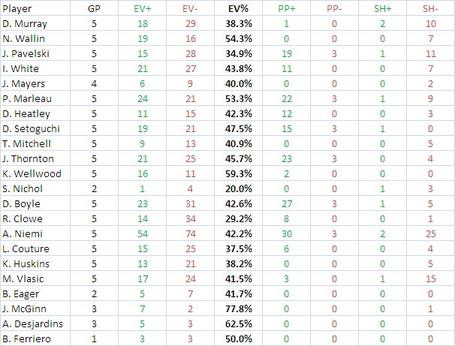 Not hard to see who was getting bombed here. Obviously if the Sharks were going to win, they needed to get more from Joe Thornton, Patrick Marleau, but what they really needed was better play from their middle six forwards. Dany Heatley and Kyle Wellwood do better here than I was expecting, but Joe Pavelski, Logan Couture, and (especially) Ryane Clowe look just as bad by the numbers as I remember them looking on the ice. The various fourth line men actually did very well, but couldn't come close to making up for what was an atrocious performance from the secondary men that the Sharks have come to count on. The top pairing of Dan Boyle and Douglas Murray also got absolutely rocked, especially since Todd McLellan was using Marc-Edouard Vlasic and Kent Huskins(!) against the Sedins in some of the later games. 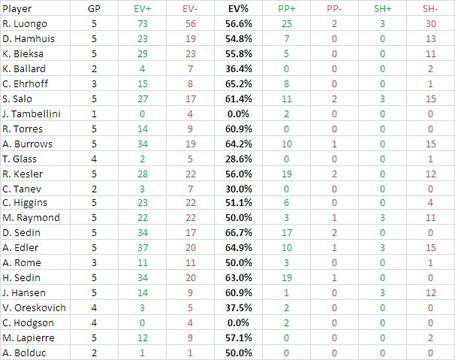 Apparently Todd McLellan didn't think the Sedins were particularly dominant in this series. I couldn't disagree more. No matter who they found themselves matched against, the Sedins were able to come out even or better, but they really cleaned up against Joe Pavelski and company - their chance differential is basically the difference for the entire series. I also thought that Dan Hamhuis and Kevin Bieksa did a fantastic job with both players coming out better than even despite a lot of tough ice time.