Forwards at the Draft

Share All sharing options for: Forwards at the Draft

With the NHL draft coming up in just a few short weeks, I thought it might be fun to start looking a little bit more at some of the players that could be available to the Oilers with the 19th overall pick. In that I haven't seen many of these players actually play, I decided that a nice place to start would be to look at a few of the major lists and then compare those players statistically. After the jump I'll run the top 15 forwards according to the Central Scouting Bureau, International Scouting Services, and The Hockey News through Gabriel Desjardins' NHL equivalencies, and talk a bit about what comes out on the other side.

So first up, here's the list, although I should note that Central Scouting actually has two lists, one for Europeans, and another for North Americans. I chose to use the top fifteen North Americans and the top three Europeans. The NHLE numbers are expressed in points per game and include the combined regular season and playoff results, which I know isn't really standard, but I like including playoff results. These are also the player's ranking among just the forwards, not his overall ranking, so some of these players will certainly be available to the Oilers 19th overall: 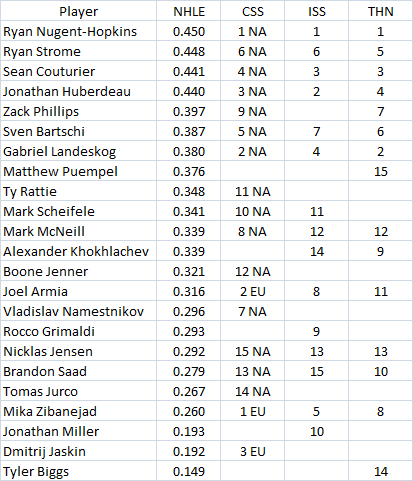 There are some interesting things here. First off, Mika Zibanejad and Joel Armia don't do so well by the numbers, but they've also been playing more limited minutes in professional leagues. To my mind, understanding where those two fit among the rest is one place that the scouts will really earn their money since - in case you haven't been paying attention to Derek's braying - Mika Zibanejad is probably not the 20th best forward available even if he does appear in 20th place on the list above.

At the top of the draft, the five forwards discussed most often are Ryan Strome, Ryan Nugent-Hopkins, Gabriel Landeskog, Jonathan Huberdeau, and Sean Couturier. Four of those players are extremely close on the chart above, but one lags well behind, and yet Gabriel Landeskog doesn't rank any lower than fourth. I think Landeskog will be a good player, but the lack of offensive upside is, to me, a real concern. At the other end we have Ryan Strome, who has the second best NHLE but ranks no higher than 5th. Once we add in the defensemen, Strome could easily fall to 8th or lower in this draft, and at that point, he would seem to be an absolute steal.

Other prospects of interest to me are Matthew Puempel and Ty Rattie, who despite providing great offense are only on one top 15, and Rocco Grimaldi who makes it into a top 15 despite providing less offense than a lot of prospects and standing just 5'6''. I should also note that Shane Prince doesn't make a single list despite an NHLE of .431, which is just shy of that very top group.