Goal Differential in the Post-Season

Share All sharing options for: Goal Differential in the Post-Season

One thing that recent Stanley Cup winners have in common is dominance on the scoreboard both in the regular season and in the playoffs. With a +77 goal differential, and the best record in games decided by two or more (excluding empty netters) in the regular season, the Vancouver Canucks have the regular season part down cold. The playoffs, however, are a different story. Just one win away from a Stanley Cup victory, the Canucks have a -4 goal differential and a rather poor 3-4 record in games decided by at least two goals (excluding empty netters). Is this kind of thing common? 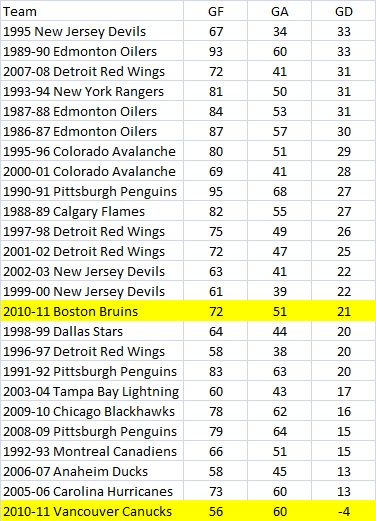 If the Bruins come back to win the series, they'll be solidly in the middle of the pack, but the Canucks are a real outlier, currently sitting 17 goals behind the next closest team, and the only club in the table with a negative goal differential. It's just... odd. But also kind of great because now we know that even if the Canucks manage to pull out a victory tomorrow night, we can sleep easy knowing that they'll be one of the the worst Cup champions ever along with that deplorable Carolina squad from 2005-06, the Pronger Ducks, and Patrick Roy's miracle Canadiens.

More seriously, just look at all of those post-lockout teams near the bottom. One of the things the league was hoping to accomplish with the lockout was greater parity, and these numbers seem to suggest that that has been accomplished. If the Canucks do go on to win, six of the seven post-lockout seasons will take six of the bottom seven spots with the 2007-08 Red Wings being the lone club to buck the trend.