What a strange game.  Boston held a heavy shot advantage throughout the game and seemed to have extended periods of possession in the Vancouver zone.  They held a slight Corsi advantage, but they couldn't generate any chances at even strength. As I'm writing this, I don't know what the storyline will be but I can guess - Luongo's Redemption.  But the narrative will be, as it so often is, wrong.  Luongo may have made 31 saves, but check out Boston's shot chart from CBS Sportsline: 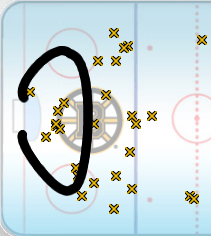 I've drawn in the general guideline I use to measure scoring chances, discussed previously here.  The shot on the post was actually a wrap-around attempt by Dennis Seidenberg that wasn't much of a chance at all.  Other than that, the Bruins had seven dangerous shots, and only five at even strength.  Take that in for just a second.  The game wasn't a Luongo redemption, this was a Canucks defense redemption.  They had an outstanding game, blocking shots taken in close and keeping the play to the outside.  Yes, they'll be overshadowed by Luongo and that clown Burrows and his antics, but this game was won by the blueline, Vancouver's supposed weakness.

This was an outstanding defensive effort by the Canucks.  Take away the three early power play chances and the Bruins only generated 5 scoring chances.  Settling for shots from the point was the Kings' strategy and it failed miserably.

One of my favorite things about NHL coaches is when they run out of ideas on the power play and can't find a way to make their roster effective with a man advantage.  To a man, every one of them turns to the biggest guy on the bench and says "Go stand in front of the net."  Craig MacTavish did it with a whole bunch of players.  Peter Deboer put Darcy Hordichuk in front in Florida.  Dan Bylsma tried his hand with Aaron Asham.  They are all seeking the "net front presence" (worst new hockey word of the last two years, by the way) that the intermission panels often speak of.  It never works.  Never.  The power play is about possession and puck movement and giant lumbering oafs contribute to neither.  When the penalty killers don't have to pay attention to the GLO, the power play becomes a 4v4.  Julien has tried this with Zdeno Chara to no avail.  Tonight he tried it with Greg Campbell.  It didn't work.  Let me say this:  if Greg Campbell plays over two minutes on the power play, you're losing the game.

Boychuk fans will be happy to see him back at the bottom of the list after a wonderful run at home.

The Krejci line continues to lose the battle at even strength.  I'm interested in seeing the series totals just to see the Krejci line's numbers.

On a positive note, I think, Shawn Thornton wasn't on the bottom of the chance list for once.

I'd like for everyone to welcome to the series Ryan Kesler, he had yet to make an appearance in the Stanley Cup Finals, but upon getting his first shot, he really proved himself tonight.

Kevin Bieksa is back with a good partner getting the easy zonestarts and he delivers an excellent performance by the numbers.  Someone is going to buy a bill of goods on July 1. 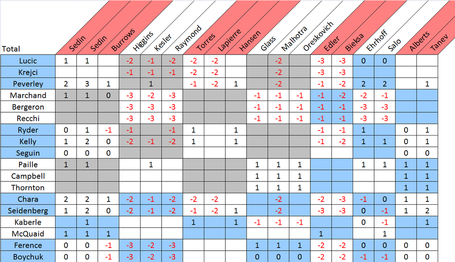 Kesler finally recovered and posted a good game, mostly at the expense of Bergeron and Boychuk.  Claude Julien's inability to protect Boychuk showed and he was back at the bottom of the pile.  It's also worth noting how well Chara and Seidenberg did against the Sedins.