Johnny Boychuk went from a bottom-line forward and AHL regular for the 29th-best team in the NHL to a top six defenseman on the Prince of Wales Trophy winners.  There's a reason he was a bottom-line forward in Colorado - he's not a good defenseman.  He was repeatedly exposed by Tampa and he was exposed in a significant way this evening in Vancouver.  Bruins coach Claude Julien split Zdeno Chara and Dennis Seidenberg in an attempt to make sure one of them was available to play against the Sedins at all times.  The problem with that, of course, is that it also meant Johnny Boychuk was going to play significant minutes against the Sedins.  Bobby Orr himself would have trouble keeping his head above water with Boychuk riding on his back.

The Canucks brought their best dirty game tonight - not only was Henrik Sedin caught embellishing worse than any Italian soccer player, Alex Burrows bit Patrice Bergeron's finger in a scrum.  There is no place for that in hockey, let alone the Stanley Cup Final.  That's something I'd expect to see in a Central League final, not from the best team in the NHL.  Brendan Shanahan should use this, his first opportunity to discipline a player, to set a standard and show  the players that his behavior will not be tolerated.  Burrows should receive at least a four-game suspension and I'd like to see a ten-game suspension.  Burrows is a repeat offender when it comes to dirty play Shanahan should make him pay for it.

For those of you new to the concept: a scoring chance is defined as a clear play directed toward the opposing net from a dangerous scoring area - loosely defined as the top of the circle in and inside the faceoff dots, though sometimes slightly more generous than that depending on the amount of immediately-preceding puck movement or screens in front of the net. Blocked shots are generally not included but missed shots are. A player is awarded a scoring chance anytime he is on the ice and someone from either team has a chance to score. He is awarded a "chance for" if someone on his team has a chance to score and a "chance against" if the opposing team has a chance to score. Finally, a big thanks to Vic Ferrari for making the whole damn thing possible with his awesome scripts.

The Bruins got the goaltending they needed, but they couldn't get the puck out of their own zone and when they did, they couldn't threaten Roberto Luongo.  The Canucks maintained the chances and possession advantage throughout.

The surprise here is the numbers posted by the Hansen, Torres, Lapierre line, but their big wins came against the Kelly line.  Julien won't make that mistake again. 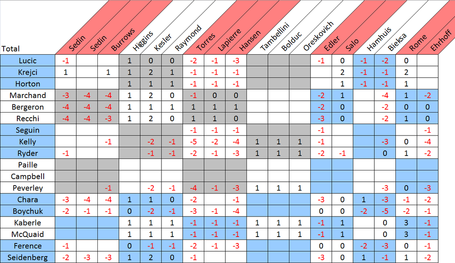 Patrice Bergeron got the match against the Sedins, but it didn't matter - the Sedins did a number on him and linemates Marchand and Recchi.  Kelly, Seguin and Ryder were beaten pretty badly by the LaPierre line and my guess is that Seguin will find his way back down to the fouth line and Rich Peverley will be on the third line in game two.