Sam Gagner is a divisive topic in Edmonton.  Mention his name and some love his future, while others scream for a trade.  Among the writers here at The Copper & Blue, I hold Gagner in rare air.  I believe he's key to the Oilers' future and that he's going to be an excellent two-way center in the coming years.  Unfortunately, he's not been able to carry the weight of such a lofty ranking.  His struggles are to be expected of a 21-year-old, but not from a 4-year-veteran.

The most disheartening part of the above table is the fall-off in the late season when the injuries to the rest of the team struck.  He had a real chance to shine and he didn't take advantage. 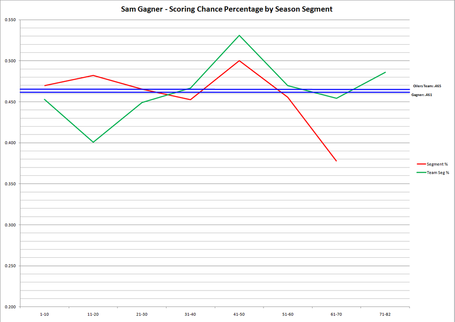 Sam's inability to take advantage of his big opportunity is obvious on the graph.

The WOWY gives us some insight into the second half of Gagner's season especially when looking at his two most common linemates, Linus Omark and Magnus Paajarvi.  Gagner was not good with either of the Swedes, but that doesn't help much to get a picture of Gagner either because he spent so much time with Dustin Penner and Ales Hemsky, with whom he was very good.  Bruce and Ryan will no doubt touch on consistency when it comes to the young center:  consistency of teammates, linemates, coaching staff and defensemen, so I'll leave that discussion to the experts.

Note the Ryan Jones effect is ever-present here as well.