Like a never-used shotgun in the closet, Steve MacIntyre sat in the press box, occupying a roster spot fit for a more productive player.  When Tom Renney thought someone was breaking in and grabbed the gun from the closet, it gave up three chances for every one it generated.

I've listed his rank among his teammates as if he did have enough chances to qualify. 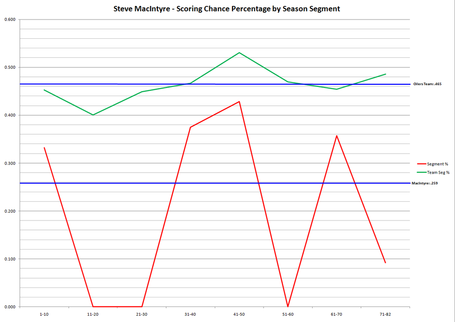 There's very little data here, but what we have reinforces what our eyes saw.  MacIntyre was hired to punch people in the face, not play hockey.

There is not enough data to have a meaningful WOWY with any player.