In a very short time, Ryan Jones has become the fan favorite in Edmonton. As is typical of guys who always look like they're trying very hard, Jones' effort, along with his hair and tendency to fall often have struck a chord with the fan base. He's the working-class hero.

Unfortunately, all of that hard work isn't showing up in the underlying numbers. 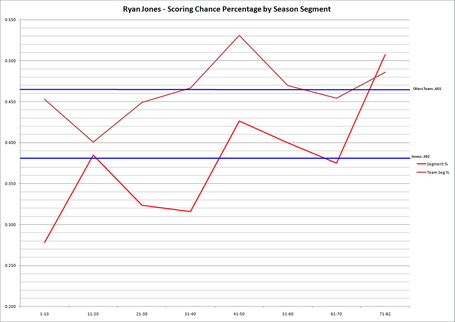 Jones posted a single segment above the team average and aside from his final .508 segment his next highest segment was .426. In four segments, he was 10 percentage points lower than the team average in the same segment.

Jones' .382 season percentage was the worst on the team. It's pretty clear to me that Jordan Eberle and Jeff Petry wear some sort of talisman that allows them to fend off the effect of Ryan Jones on their chance rates. What I find remarkable about the "Without Jones" column is how much closer so many players get to 50% without him.