Share All sharing options for: Year-End Scoring Chances and Fenwick

The Edmonton Oilers were a pretty humble bunch to close out the year. Dustin Penner played his last game as an Oiler on February 27th. Ales Hemsky was injured in the Oilers' very next game as some kind of karmic punishment and didn't see the ice after March 1st. Taylor Hall followed suit when he was hurt in a fight, not playing again after March 3rd. Sam Gagner was viciously attacked by Ryan Jones (okay, not really), and was down for the year as of March 9th, and he was soon accompanied by Shawn Horcoff on March 13th. That's five of the Oilers' six best forwards gone from the lineup for the last twelve games of the season, a time when most other teams are fighting for their playoff position. Any team would struggle under those conditions, and given Edmonton's forward depth, the Oilers would really struggle.

When the club lost 6-1 to the Calgary Flames on April 6th, the twenty men in the lineup had a total cap hit of $22.79M (including all bonuses), which is just a teensy bit less than the salary floor. With a club like that, I was expecting a lot of games with a five-goal margin over the last twelve games, and thought that watching such a team might just be an interesting case study in replacement level hockey at the NHL level. Now, on the one hand, the Oilers went 2-7-3 in those last twelve games, so it's not like they were good, but their even strength play was much better than I had expected.

The first point on the graph below is game number ten and shows the Oilers' scoring chance and Fenwick percentages at even strength through the first ten games. Each subsequent point on the graph is the even strength scoring chance and Fenwick percentage over the previous ten games (so the second point is games 2-11, the third point games 3-12 and so on), and the big vertical line in the middle of the chart is running through the Oilers' last game before the trade deadline. Thanks to Dennis King (Chances) and Vic Ferrari (Fenwick) for providing the data. 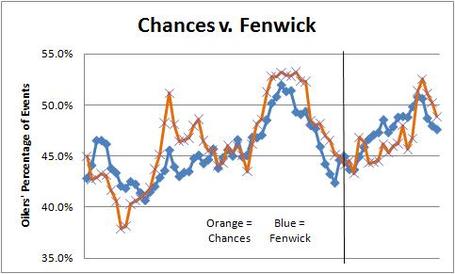 Pretty much exactly as I expected. A huge decline into the trade deadline, and then once all of the best players have been purged from the lineup, a run-up to 50% to close out the year. Uhhh.... nope. I realize that some of this can (and should!) be brushed aside as score effects, but it's not like the Oilers hadn't benefited from that all year. No, as it turns out, those scrubs who finished the year with the Oilers deserve some credit for remaining competitive in the NHL. And for the guys with a long-term future on this club, it's absolutely wonderful news. Players like Jordan Eberle, Teemu Hartikainen, Magnus Paajarvi, Andrew Cogliano, and Linus Omark were thrown into the deep end, and panicked flailing aside, they didn't drown. And when I see that, it's hard to be just a little bit optimistic about next year. Not in the "playoffs" sense of course, but the pieces do look to be in place for a not-last place finish! Optimism reigns!