The aftermath of the Los Angeles Kings' loss to the San Jose Sharks has produced one of the more bizarre fan backlashes in recent history, and as a fan of the Edmonton Oilers, I'm well-versed in fan backlashes.  Since the lockout, Edmonton fans have given us the Chris Pronger backlash, the Craig MacTavish backlash, the Dustin Penner backlash, the Shawn Horcoff backlash and, well you get the picture.  The constant backlash in Edmonton has surrounded a losing team, and in fact, the worst team in the NHL over the last five years.  But Los Angeles was a playoff team, a seventh seed who lost to the second seed as expected.  They were handicapped because they were missing their best forward, so who could the fans possibly have in their sights?

He's an incredibly effective player, one of the best at his position, and over the last couple of seasons, he's proven himself as someone who drives the play, sometimes single-handedly.  Despite all of that, he's been called "fat", "out of shape", "unfocused", and "lazy" since losing to the Sharks.

The scapegoating began on Twitter at the end of each Kings' loss in the series.  It spread to various message boards and blogs and by the time the Sharks eliminated the Kings, there was no doubt - the Kings lost because of the failings of one man and one man alone.

Though the reaction has been widespread, this thread captures the fan reaction perfectly.  A sampling of the first twenty or so grades shows what Kings fans think of Doughty's performance against the Sharks.  I've compared Doughty's grades with those of Jack Johnson, L.A.'s human turnstile on the blueline:

According to the fans, Doughty graded out at C- and Johnson at B+.

My working hypothesis is that Kings' fans are suffering mass delusions.

I've written about selective perception and the effect it has on fans with pre-existing biases, but this is an extreme case. I don't know if there is a bias towards blaming the better players when things go poorly, regardless of actual performance and influence on the outcome, but it seems that something like that is at work here.  Doughty is taking the blame for the loss because he's the face of the team and in the absence of Anze Kopitar, clearly the best player on the team.  Never mind that the fan grades were diametrically opposed to actual on-ice performance, the sentiment seems to be "the team lost, we're going to play whack-a-mole with our best player."

To demonstrate just how diametrically opposed the grades and performance were, I've pulled some stats from the Sharks-Kings series recap I wrote last week, just to zero in on this comparison.  First up is the even strength scoring chances for and against comparison:

And Doughty wasn't getting the benefit of the easier minutes, either.  A look at the head-to-head time on ice shows just how tough Doughty's minutes were: 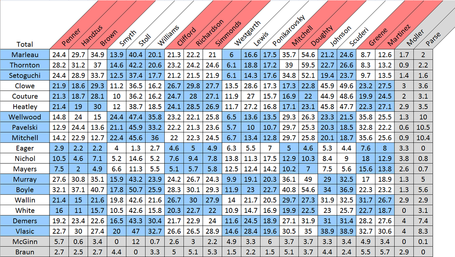 Doughty played nearly an hour of even strength time against the Thornton line while Johnson got just 20 minutes.

Those differences in the scoring chances become clear when we look at the Kings performance with and without Doughty and Johnson:

Why then, is Johnson being lauded for his play in this series?  My initial thought was his point production - after all, he did record five points in six games.  Last playoff season, Johnson recorded seven assists in six games.  He can clearly help out on the power play, but as we've seen above, he gives that and more back at even strength.  In discussing Johnson's performance, the always astute George Ays weighed in on his even strength play:

He has the worst plus/minus in the league among defenseman since the lockout at -78. He leaks shots and chances against like the Kings are shorthanded. He does all that without even having the responsibilities of playing other 1st lines, thanks to Mitchell and Doughty.

That didn't change in these playoffs.  Doughty and Mitchell took the toughs, Johnson got easier minutes and was buried.  But there's also something else going on here.  In the comments in the thread mentioned above and in various other places, Johnson is being praised for his defensive play, his "positioning" his "own zone work" and so on.  For once, I get to throw the "are they even watching the games?" question out there.

I used this quote in the selective perception article, and it applies here as well:  "Remember it however you want to and I’ll remember it how it actually happened."

And just so I'm not accused of "misremembering", take some time out to peruse these videos, paying careful attention to #3 on the ice: