One of the things mentioned to either pump a player up or beat him down at the draft is whether or not he's improved during his draft year. It's one of the big knocks on Sean Couturier who had a great season in 2009-10, but only increased his points per game this season by 13.2%. People were expecting a bigger step forward, and when others in his draft class took that big step up, Couturier started to fall down the charts. After the jump, I'll take a look at all of the forwards drafted out of the CHL in the first round between 1999 and 2006 (min. 50 GP in draft year) who also played in the CHL in the year before their draft year. Was a big jump in production a positive indicator as these players moved into the NHL?

First up, here's the chart, which I think is pretty self-explanatory (playoff points are included in the totals): 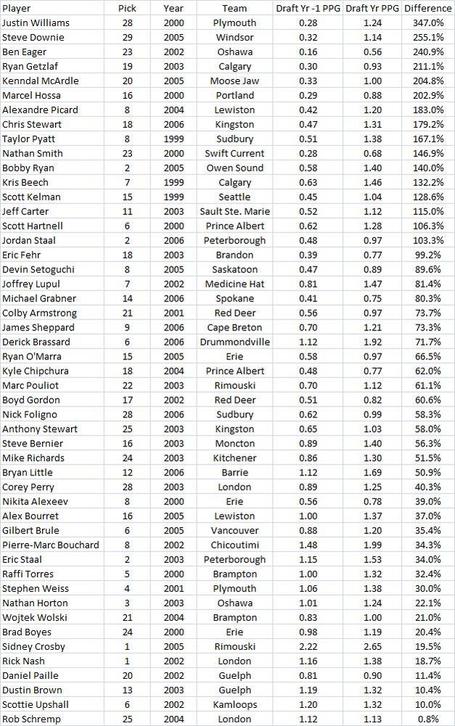 The median improvement here is 62.0% (Kyle Chipchura), so we'll use that as the cut-off between "lots of improvement" and "not much improvement". That's pretty arbitrary, but what are you going do. If we go back to the chart I used in an earlier post, we can then look at how each group does translating their offense (CHL points per game in their draft year, this time regular season only since that's the data I used in the previous post) to the NHL (career points per game; if the player does not have 50 GP, his NHL PPG counts as 0): 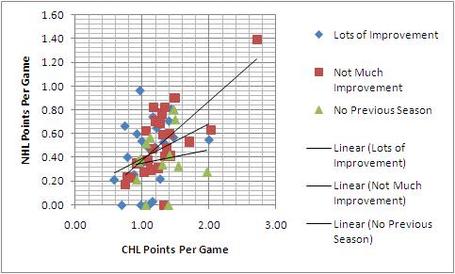 By way of reminder, the correlation between these two variables for the whole group is good but not great (Pearson's r = 0.47). For the "not much improvement" group, the correlation is quite a bit stronger, and actually very good (Pearson's r = 0.70). For the "Lots of Improvement" group, the correlation is worse than the overall group (Pearson's r = 0.31), and for the smaller "No previous season" group, it's still positive, but very weak (Pearson's r = 0.14). So what does that mean? Well, the first caution is sample size. Each of the two main groups is just twenty-five players, so these results aren't definitive. That said, I think it means that we know a lot more about the players who have been consistent over a two-year period. The level they've established in junior is more likely to translate to the NHL, which is good to know! For those taking a big step, or who haven't previously played in the CHL, their level of ability is much less clear. They might significantly overperform or underperform their draft-year totals, but you don't really know which it's going to be (it looks to me like there are extreme examples on both sides).

So what about this year's prospects? Here's what they've done this season (including playoffs):

The safe bets in this group are Sean Couturier, Gabriel Landeskog, and Ryan Nugent-Hopkins (although he's awfully close to the cut-off). Jonathan Huberdeau and Ryan Strome, meanwhile, are much riskier picks. Being a pretty conservative fellow, my tentative list would then favor the safe picks, even though one of the other two may well end up being the best player. As such, I'll update my tentative draft list to read Couturier - Nugent-Hopkins - Huberdeau - Strome - Landeskog.