At various times throughout the season, I've thought to myself "Tim Thomas is no Dominik Hasek..." nearly every time some announcer (hey Jack Edwards) tried to make the connection.  And while Thomas still isn't as good as Hasek was, he's starting to sniff rarefied air reserved for the all-time greats.

Thomas' Bruins were outmatched in every area by the Lightning, but Thomas held them in nearly every game and delivered them to the Stanley Cup finals.

Tampa should leave the series with a feeling of accomplishment, even in a loss.  They outplayed the Bruins by a wide enough margin that only superhuman goaltending could do them in.  And it did.

*4v4 chances do do not count as even strength time on ice. See here for an explanation.

The Lightning were +22 in scoring chances for the series, including +20 at even strength.  Overall, they beat the Bruins in every period, both at even strength at on the power play.  All things being equal, the difference is ~3 goals.  But things were not equal with Thomas in net.

Tampa's top pairing of Brewer and Ohlund were out-chanced, as was the fourth line, but aside from those players, the rest of the team did some amazing work, especially at even strength.

I wrote about Marc-Andre Bergeron's dominance throughout the series and I'm still without an explanation.  By the chances he was the best player in the series, and the margin isn't close.  Taking all regular players into considering, Bergeron led the series in chances for, chances against and chance differential.  He was 36 CF - 9 CA for the series, or +4.15 for every 15 minutes of even strength time.  Just for the hell of it I extrapolated those numbers for a full regular season:  421 CF - 105 CA, or ~64 GF - 16 GA.  If Bergeron played a season like he played that series, he would have been somewhere around +48 on the season.  I understand his minutes were well-managed and he was heavily protected, but he destroyed those protected minutes.

Victor Hedman was no slouch, either.  Hedman was +15 for the series, second for the Lightning, just ahead of Steve Downie's +14.  Except for his HUA in game 3, Hedman played like a defenseman of 30, not 20.

Two Bruins won their overall battle:  Shawn Thornton and Patrice Bergeron.  Every other Bruin was even or below for the series.  Bergeron's return from injury was the turning point of the series.

Patrice, like Marc-Andre, generated the most chances per minute and surrendered the least.  Gregory Campbell was especially terrible at even strength, even though he had limited ice time. 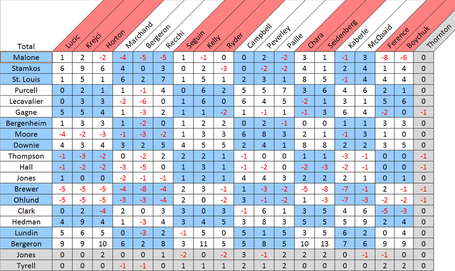 Tampa's first two lines and especially that third pairing dominated Boston's top unit.  Called "The Big Line" by nearly every broadcaster and sports media hack, the line fell flat on it's face.  Lucic - Krejci - Horton were -4, -8, -4 in the chances department.  It's only going to get worse for that line against the Canucks.
Bergeron's head-to-head chart is staggering. 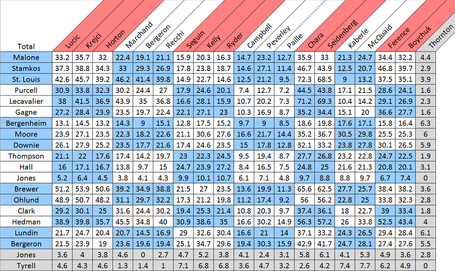 The bulk of Marc-Andre Bergeron's minutes came against Boston's third and fourth lines.  For all of the talk about Chara's matchup against Lecavalier, Julien chose to use Chara against St. Louis nearly as much. 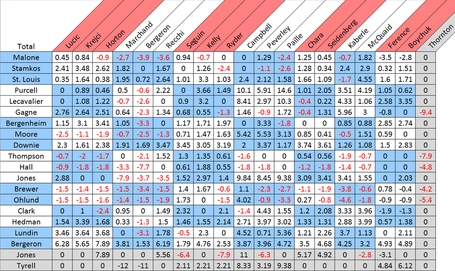 Julien has to be worried about his "big line" heading into Vancouver.  His problem is two-fold though:  Krejci's line is going to get beaten up by legit competition, but so is Kelly's line.  With only one legit line to take the toughs, the Bruins could be in for a short Cup finals visit.